What’s Coming To Netflix In June 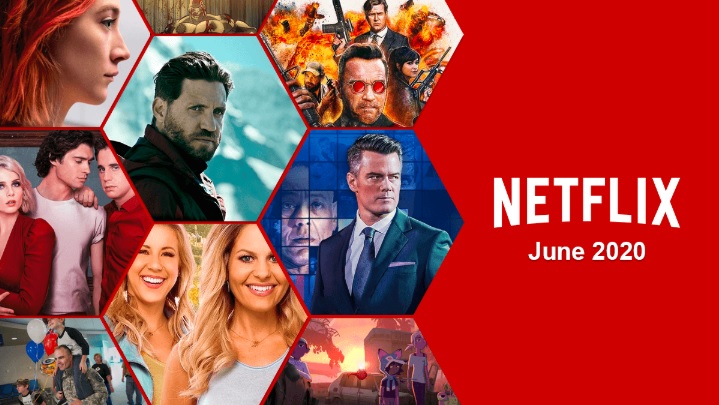 Things may slowly be returning to normal...but the new normal will probably include a lot of Netflix..at least in the near term. So here’s a look at what’s coming to Netflix in June, courtesy of the folks at Whats-On-Netflix.com…

Note: in total, over 50 movies and series hit Netflix US on June 1st. Full list here.

§  Cape Fear – Unclear which version at the moment.

§  Cook Off (2017) – Comedy romance indie flick about a single mother entered into a reality TV show.

§  Juwanna Mann (2002) – Rom-com from Jesse Vaughan about a basketball star who is fired from the NBA.

§  My Shy Boss (Season 1) – K-drama comedy series about the boss of a PR company who is extremely shy.

§  Our House (2018) – Horror about a tech genius inventing a device that increases paranormal activity.

§  The Boy (2016) – Horror from William Brent Ball where a childhood doll comes alive.

§  The Disaster Artist (2017) – The biopic from A24 about the making and premiere of the infamous movie, The Room.

§  The Healer (2017) – Family comedy-drama about a young man who is granted the power of healing.

§  The Help (2011) – Emma Stone and Viola Davis feature in this Oscar-winning drama about a young writer breaking the status quo during the 1960s.

§  The Show (2017) – Thriller starring Josh Duhamel where a reality show becomes a game where contestants begin ending their lives for the enjoyment of the audience.

§  The Silence of the Lambs (1991) – The multi-Oscar winning thriller starring Anthony Hopkins makes its return onto Netflix.

§  The Stolen (2017) – Action-adventure movie about a woman who is searching for her kidnapped son in the Wild West.

§  Walk Hard: The Dewey Cox Story (2007) – John C. Reilly plays the role of a singer who becomes a musical legend.

§  Alone (Season 6) – History channel’s reality series where survival experts brave the elements on their own.

§  Lady Bird (2017) – A24 and Greta Gerwig three years ago bought the multi-Oscar nominated Lady Bird to our screens. The comedy starring Saoirse Ronan is about a 17-year-old growing up in California.

§  Spelling the Dream (2020) N – High-stakes documentary on the spelling bee and how Indian-Americans are winning.

§  Can You Hear Me? / M’entends-tu? (Season 1) N – Canadian series about three friends living through dysfunctional lives.

§  13 Reasons Why (Season 4) N – The final part of the Netflix show that started strong and went off on a wild tangent.

§  Choked: Pasai Bolta Hai (2020) N – Hindi movie about a bank employee who has limited prospects who finds a way of making big money.

§  Hannibal (Seasons 1-3) – Every season of the epic NBC series arrives on Netflix in the US.

§  Supernatural (Season 15) – The majority of the final season of Supernatural drops on June 5th with more to come later in 2020.

§  The Last Days of American Crime (2020) N – Heist thriller based on the comic series of the same name.

§  Queen of the South (Season 4) – The latest entry of the Breaking Bad-esque series from USA Network.

§  The Night Clerk (2020) – Michael Cristofer writes and directs this crime drama starring Ana de Armas and Tye Sheridan about a hotel clerk who is the subject of a murder investigation.

§  Before I Fall (2017) – Mystery movie that sees a girl relive the same day over and over hoping to find out the way she died.

§  Curon (Season 1) N – New Horror series about a family returning home to a house that’s got a shadowy family legacy.

§  Middle Men (2009) – Geoge Gallo’s comedy-drama about Jack Harris one of the pioneers in online commerce.

§  Whispers (Season 1) – Drama about an affluent family looking into the truth as dark secrets come out against them.

§  Dating Around (Season 2) N – Next entry in the dating reality series.

§  Kipo and the Age of Wonderbeasts (Season 2) N – The next set of episodes for the beautifully animated kids series about a girl navigating the world after an apocalyptic event.

§  One Piece (Seasons 1 – 3) – All the anime series available on Netflix ahead of the Netflix live-action reboot.

§  ONE PIECE (Multiple Seasons) – Every season of the anime series ONE PIECE.

§  The Search / Historia de un Crimen (Limited Series) N – Spanish series based on the true story of a kidnapping in Mexico City.

§  How to Get Away with Murder (Season 6) – The final season of the ABC series from Shonda Rhimes.

§  The Show Must Go On: The Queen + Adam Lambert Story (2019) – Documentary on Adam Lambert who took over the role of Freddie Mercury in the band, Queen.

§  The Darkness (2016) – Kevin Bacon horror-thriller about a family returning from the Grand Canyon with an evil supernatural presence.

§  The Order (Season 2) N – Teen horror-fantasy series comes back for its second season.

§  Babies (Season 2) N – Next part of the docu-series looking into how babies develop.

§  Father Soldier Son (2020) N – Documentary from the New York Times following a military family over the course of 10 years.

§  Floor is Lava (Season 1) N – New reality series where contestants do whatever it takes to not touch the floor.

§  The Politician (Season 2) N – The next season of the Ryan Murphy series where Payton will be running for an actual office with his crack team.

§  Dark Skies (2013) – Scott Stewart’s horror about a family who realize something is coming after them.

§  Eric Andre: Legalize Everything (2020) N – Stand-up special from the provocateur himself.

§  Athlete A (2020) N – Documentary that looks into the reporters that broke the story of Larry Nassar’s abuse of the USA Gymnastics team.

§  Eurovision Song Contest: The Story of Fire Saga (2020) N – Will Ferrell and Rachel McAdams appears in this comedy based on the singing contest.