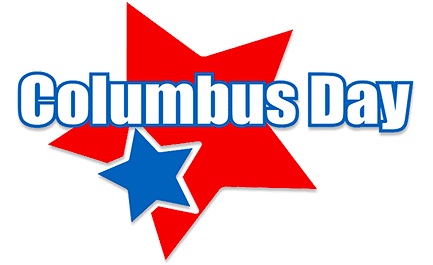 According to an article by Maria-Elpida Flessa on the Useless Daily website, Columbus Day officially celebrates the anniversary of Christopher Columbus’ arrival in the Americas (on the island of Guanahani in the Bahamas) on October 12, 1492. It is a national holiday in many countries in the Americas and elsewhere.

Christopher Columbus was an Italian sailor, born in Genoa, Italy in 1451. He sailed with three ships, the Nina, the Pinta, and the Santa Maria, given to him by the city of Palos and a  crew of 90 people. Christopher  Columbus’ landing in the Americas is celebrated as “Columbus Day” in the United States, as “Día de la Raza” (“Day of the Race”) in many Latin America countries, as “Día de la Hispanidad” and “Fiesta Nacional” in Spain (where it is also the religious festivity of la Virgen del Pilar), as “Día de las Américas” (“Day of the Americas”) in Belize and Uruguay, as “Discovery Day” in the Bahamas, as “Día del Respeto a la Diversidad Cultural” (“Day of Respect for Cultural Diversity”) in Argentina and as “Giornata Nazionale di Cristoforo Colombo” or “Festa Nazionale di Cristoforo Colombo” in Italy and in the Little Italys around the world.

Columbus Day first became a federal holiday in the United States in 1937. South Dakota, Alaska and Hawaii do not recognize Columbus Day. Since 1970, the holiday has been fixed to the second Monday in October (the same day as Thanksgiving in Canada). Many Italian-Americans observe Columbus Day as a celebration of their heritage. It is generally observed nowadays by banks, the bond market, the U.S. Postal Service, other federal agencies, most state government offices, many businesses, and most school districts. The traditional date of the holiday also adjoins the anniversary of the United States Navy (founded October 13, 1775), and thus both occasions are customarily observed by the Navy (and usually the Marine Corps as well) with either a 72- or 96-hour liberty period.