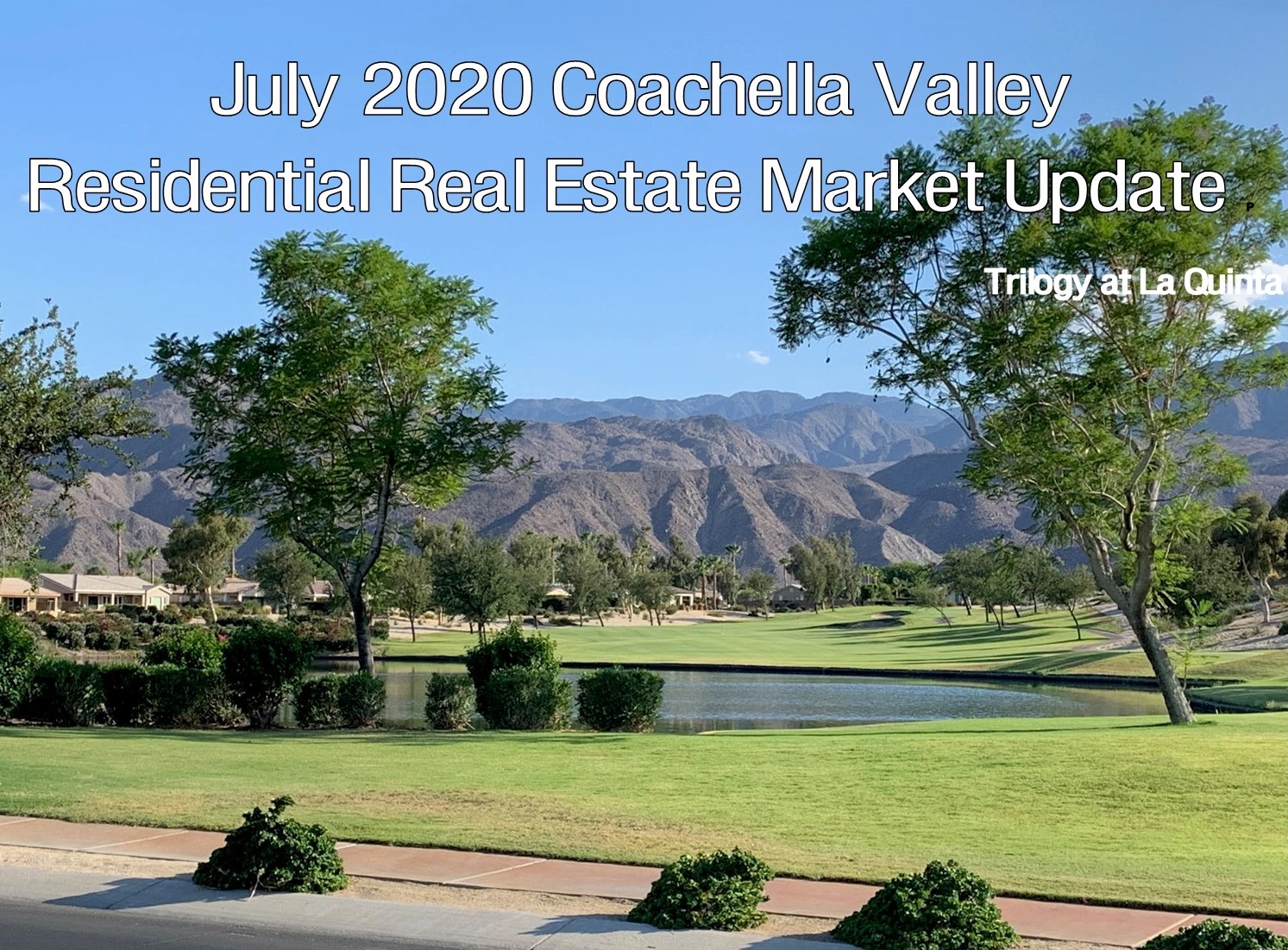 The local real estate experts at Market Watch LLC have released their July Desert Housing Report. Some of the highlights: 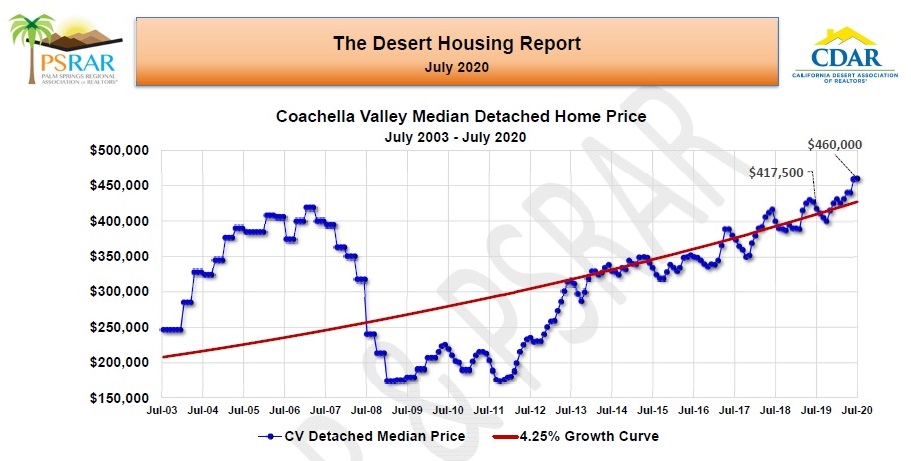 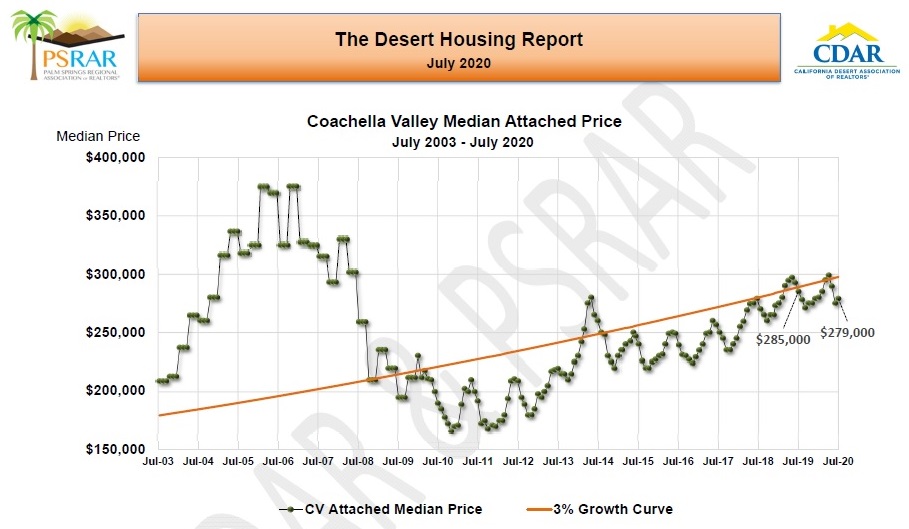 The Coachella Valley’s July attached home median price was $279,000 (down 2.1% from $285,000 one year ago). Market Watch noted that the relative price weakness in the attached home market was first noted about a year ago and is not the result of the current Coronavirus pandemic. Market Watch further noted that demand for condominiums is very seasonal and the period between June and September has been weak every year since 2010. 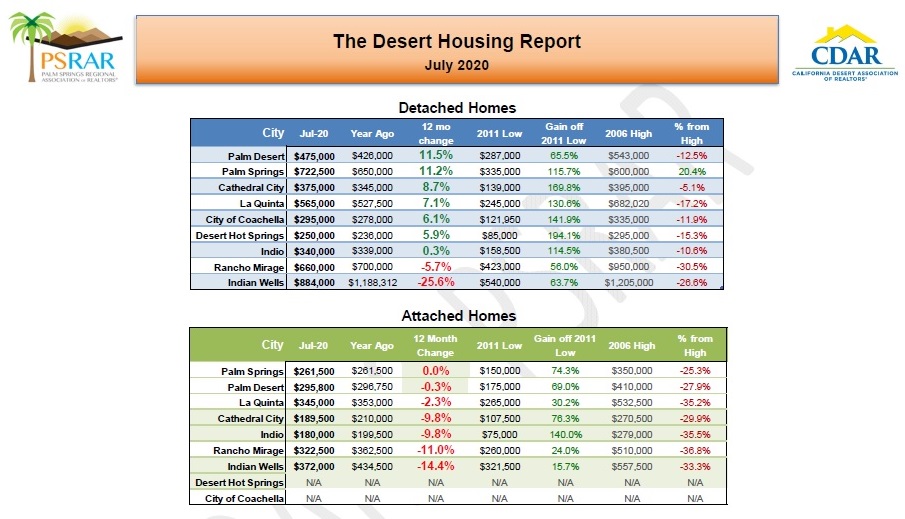 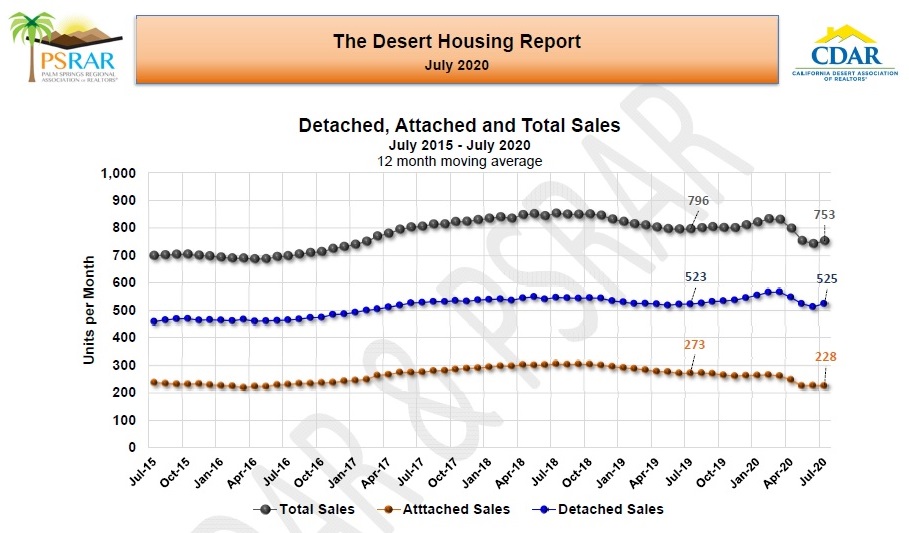 Total home sales averaged over the last 12 months declined in April, May and June but have stabilized and are now down only 5.4% from one year ago. This decline in total sales is primarily due to the 16.5% decrease in attached home sales. 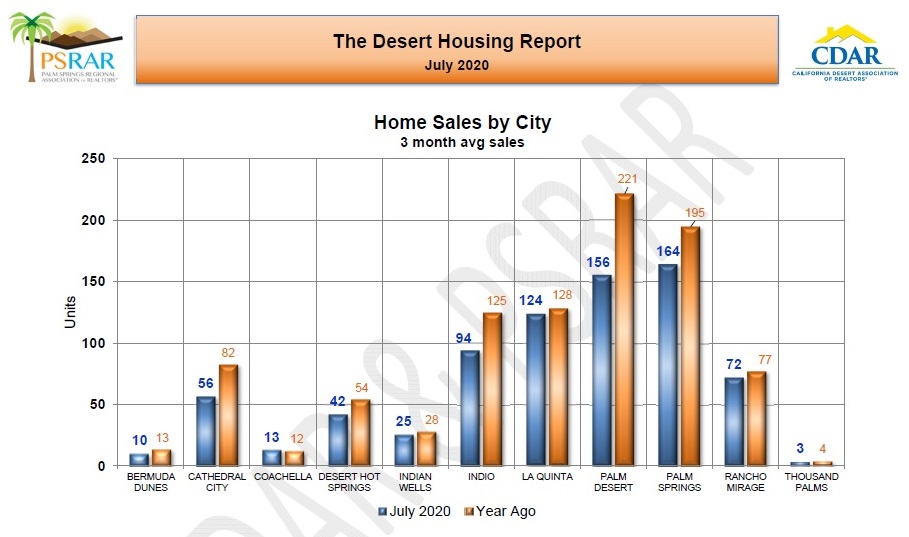 Every Coachella Valley city (other than Coachella) showed a year-over-year sales decline. In Market Watch’s opinion, these sales declines were due to the lack of available supply of detached homes, particularly in the lower price ranges, and the high level of attached home inventory in a few cities, such as Palm Springs and Palm Desert. 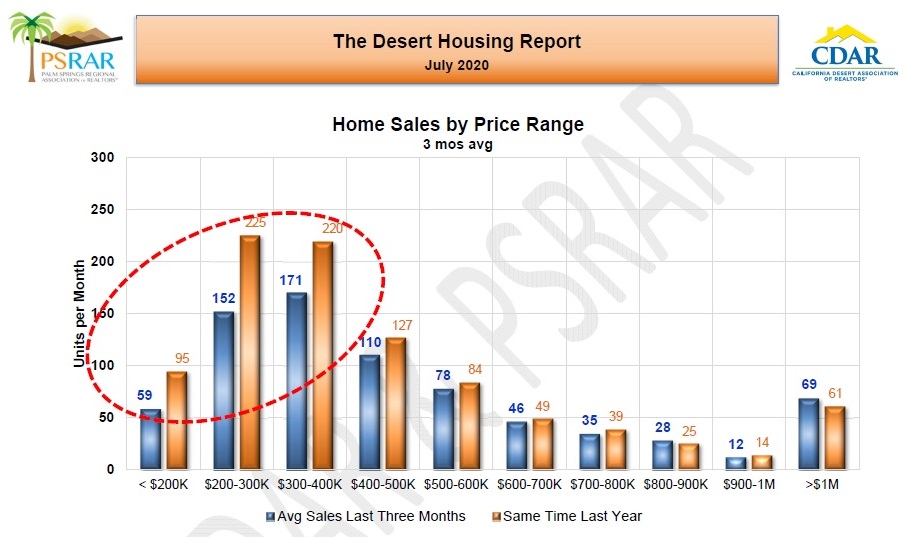 Market Watch stressed that the largest sales declines were in the 3 price brackets under $400,000. Market Watch felt that the primary reason for this was the significant decline in sales of condominiums (which are generally priced under $400,000) and an extremely low supply of detached homes in this price range. Market Watch further noted that the higher price ranges showed comparatively little sales change to year ago levels (with sales increasing for homes priced higher than $1 million). 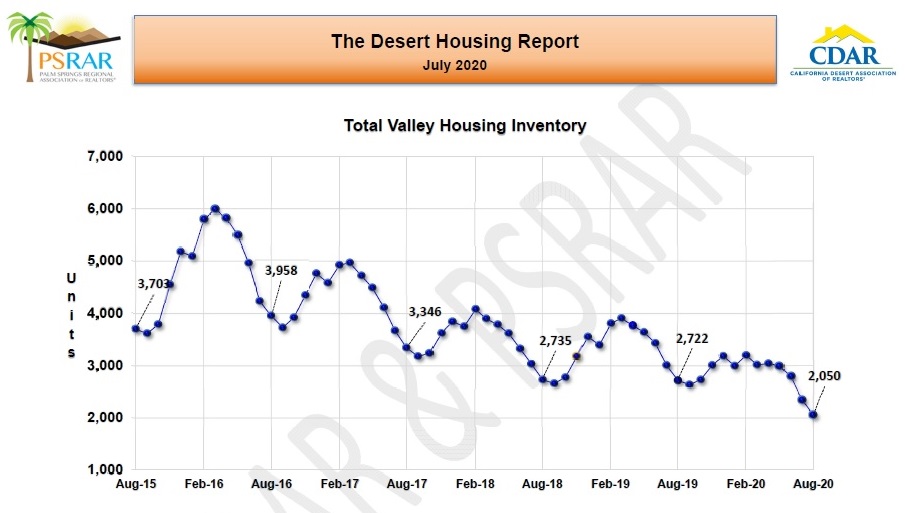 Coachella Valley housing inventory was 2,050 units on August 1st, the lowest level in history. The current inventory of 2,050 units is almost 700 units less than any previous August 1st. Market Watch noted that this low inventory level is beginning to create a “multiple bidding” market, where buyers are actively competing for the small number of available homes. 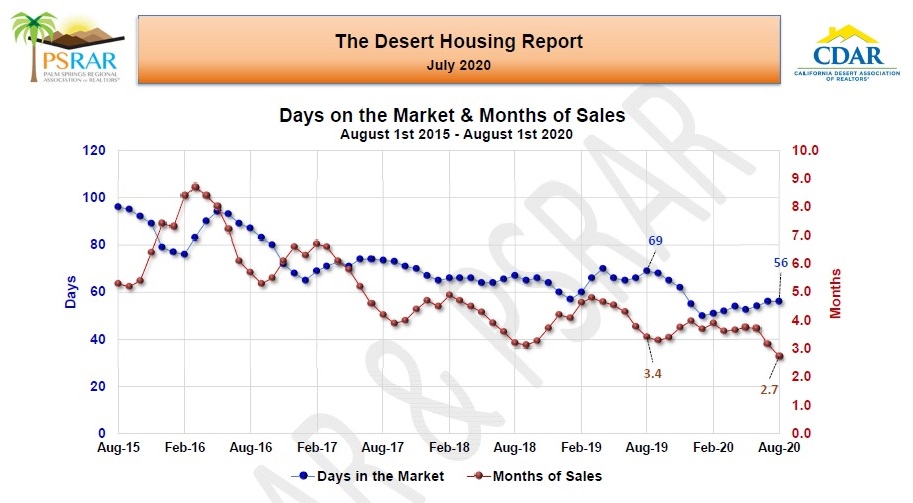 Because of growing sales and record low inventory, the month of sales ratio is also at a record low of 2.7 months (meaning that demand far exceeds supply). Market Watch noted that this coupled with the lowest mortgage interest rates in the last 70 years should continue to put upward pressure on home prices throughout the Coachella Valley. In their opinion, it was ironic and almost unbelievable that this is occurring in the middle of an unprecedented national pandemic. This strength is confirmed by a median value of only 56 days in the market (the lowest number of days in over five years). 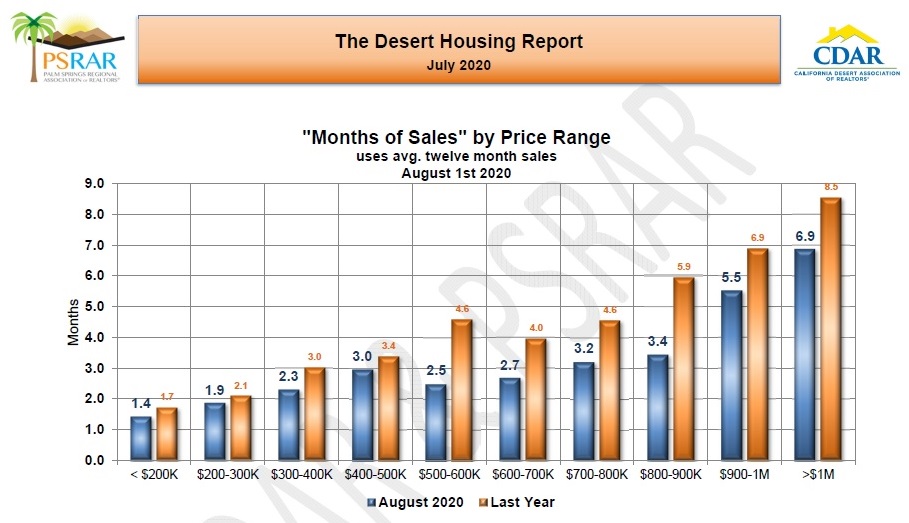 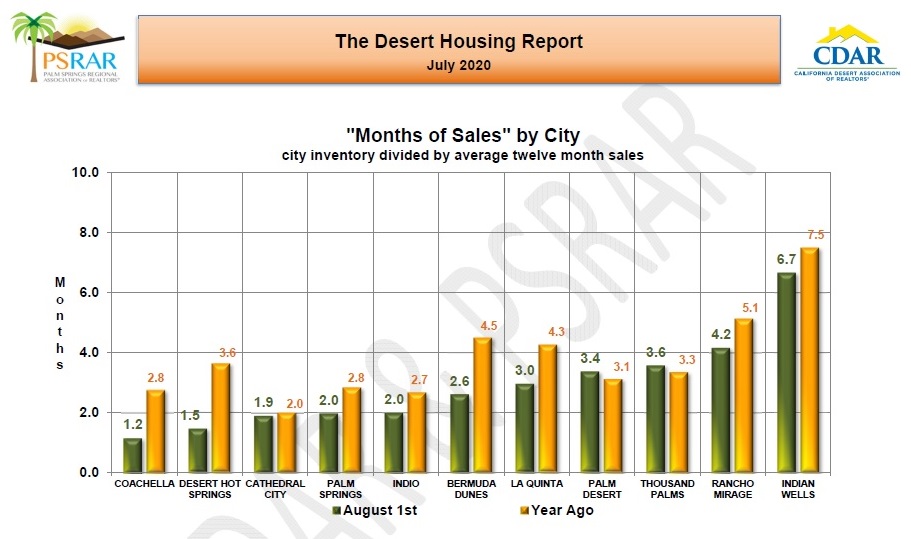 On August 1st, the months of sales ratios in nine of the Coachella Valley’s eleven cities were the same or lower than they were one year ago. Only Palm Desert and Thousand Palms had slightly higher ratios. Market Watch noted that Indian Wells, with a ratio of 6.7 months, was still considered a “seller’s market” because of the large number of high-priced homes throughout the city. 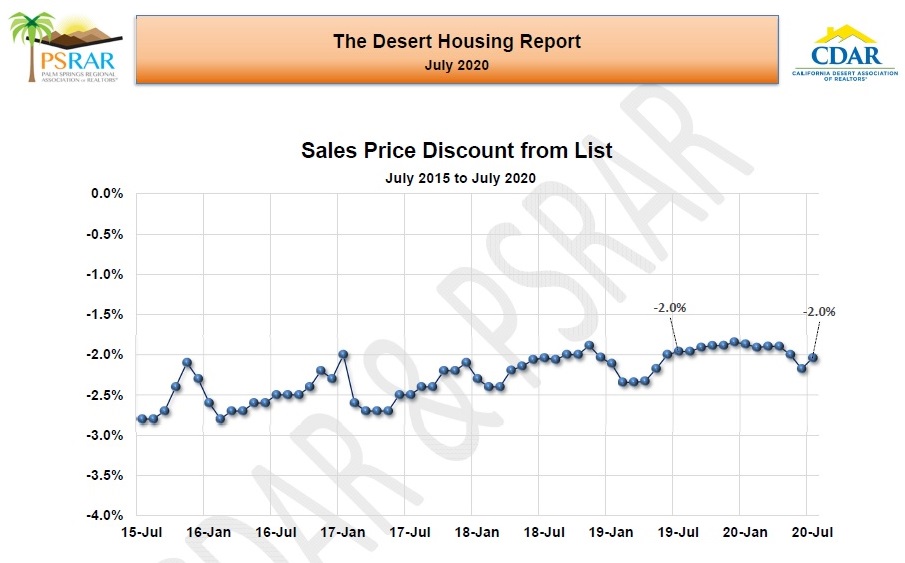