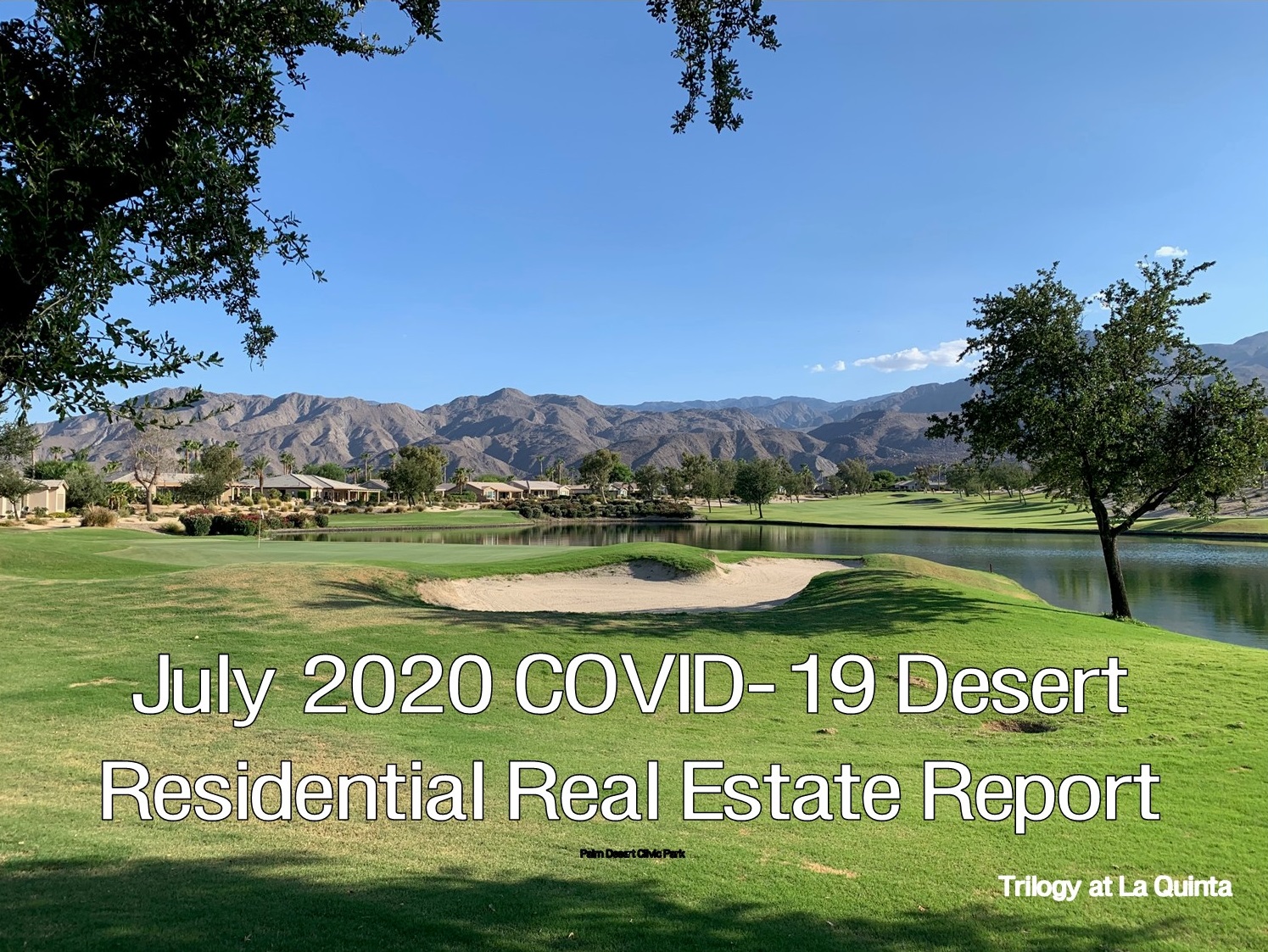 Local real estate market gurus, Market Watch LLC, reported on the impact of COVID-19 on the Coachella Valley housing market in July. In order to do this, Market Watch has adopted 28-day moving averages for all of the metrics used in their COVID-19 Desert Housing Report in order to show short-term sales and price changes. Some highlights: 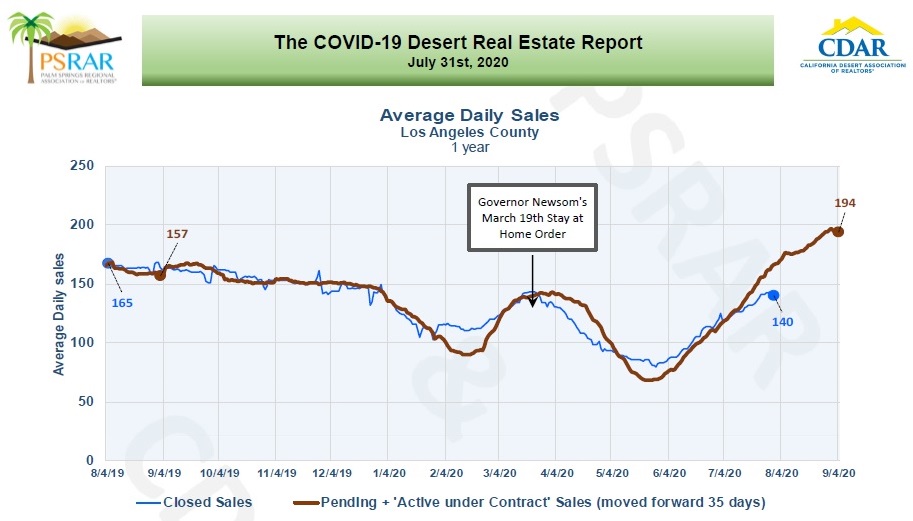 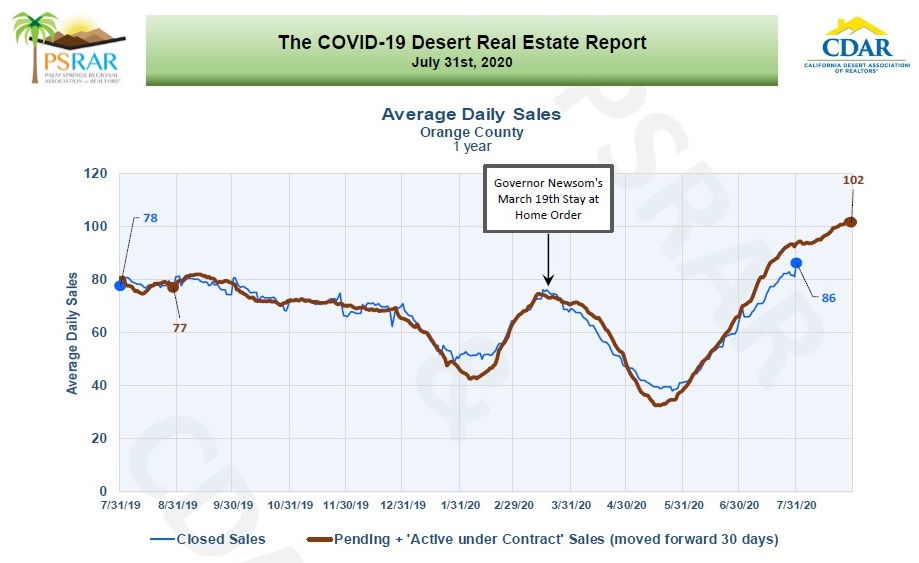 Market Watch noted that Orange County was showing a similar recovery pattern to Los Angeles County. Closed sales were 10% above year ago levels. The sum of pending and active under contract sales, moved forward 30 days, indicated to Market Watch that total closed sales should continue to grow over the next month, probably reaching an increase of 30% above year ago levels. 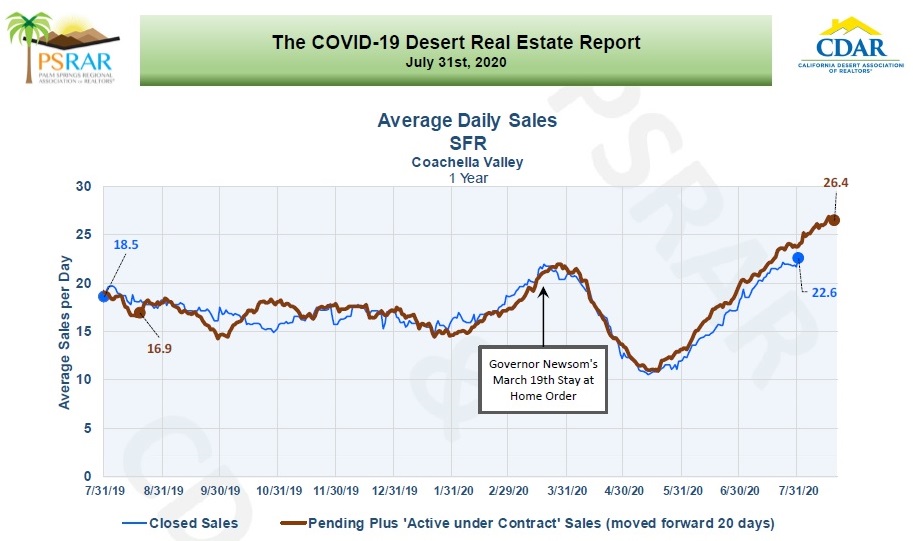 Turning to the Coachella Valley, Market Watch noted that with escrow times for detached homes averaging 20 days, moving pending sales ahead 20 days provides a good indicator of what closed sales will be. Market Watch noted that at the end of July, closed sales of single-family residences were averaging 22.6 homes per day (up 22% year-over-year) and the highest number for the entire year. With pending sales up 56% year-over-year, Market Watch predicted that closed sales would probably rise another 20% to 25% over the next couple of weeks. 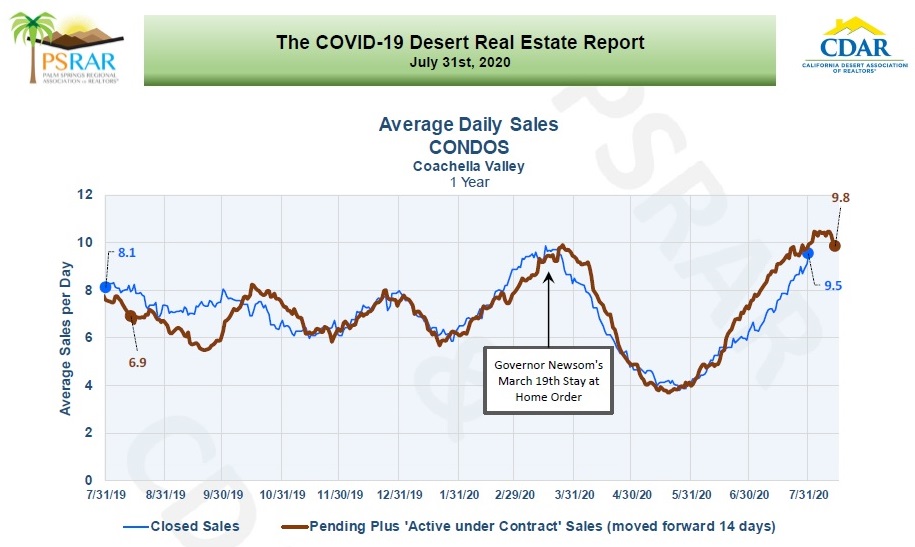 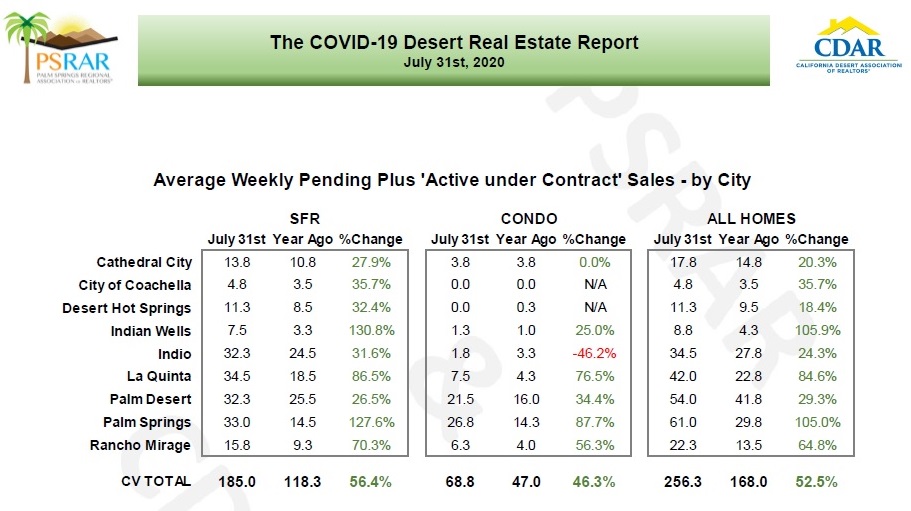 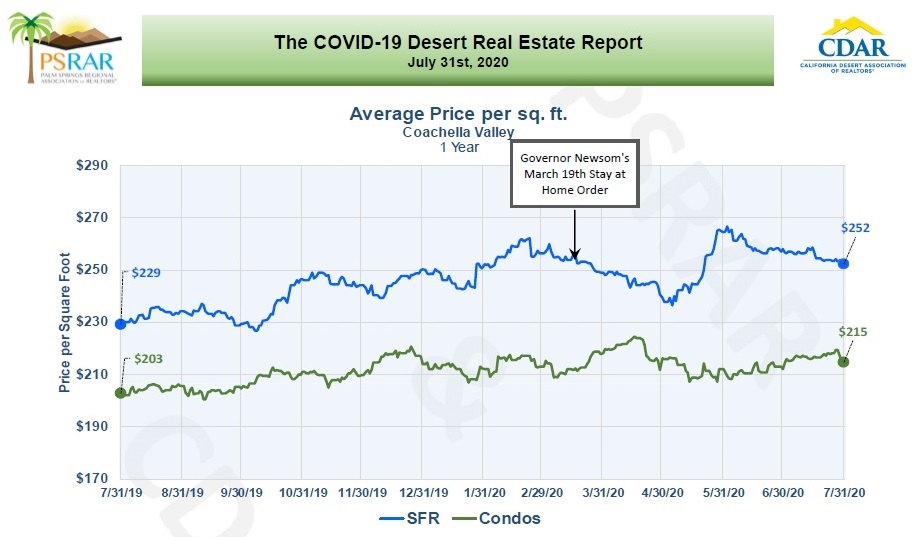 Market Watch pointed out that while home sales have been surging over the last few months, it was not being reflected in average per square foot prices yet. Average per square foot prices for single-family residences and condominiums in the Coachella Valley were approximately the same as they were on March 19, the start of California stay-at home order. However, on a year-over-year basis, the average price per sq. ft. of a single-family residence is up 10%, while that of the average condominium is up 6%. 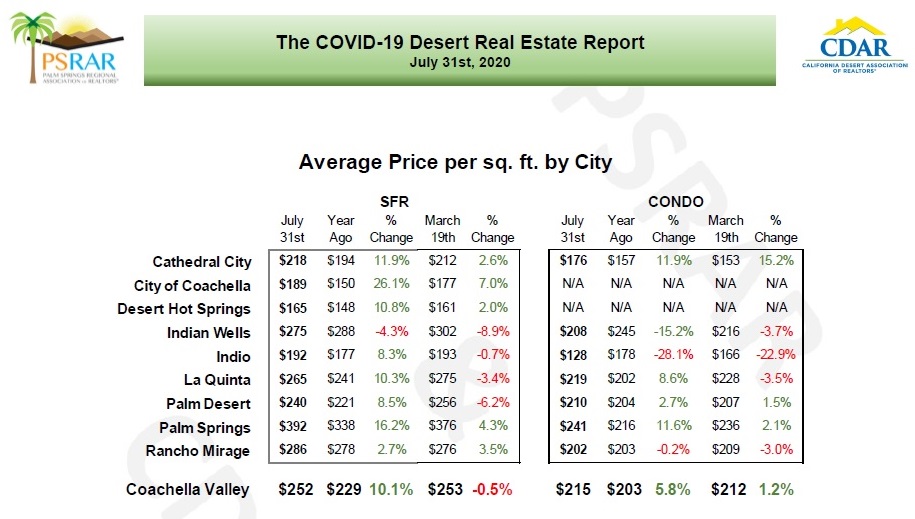 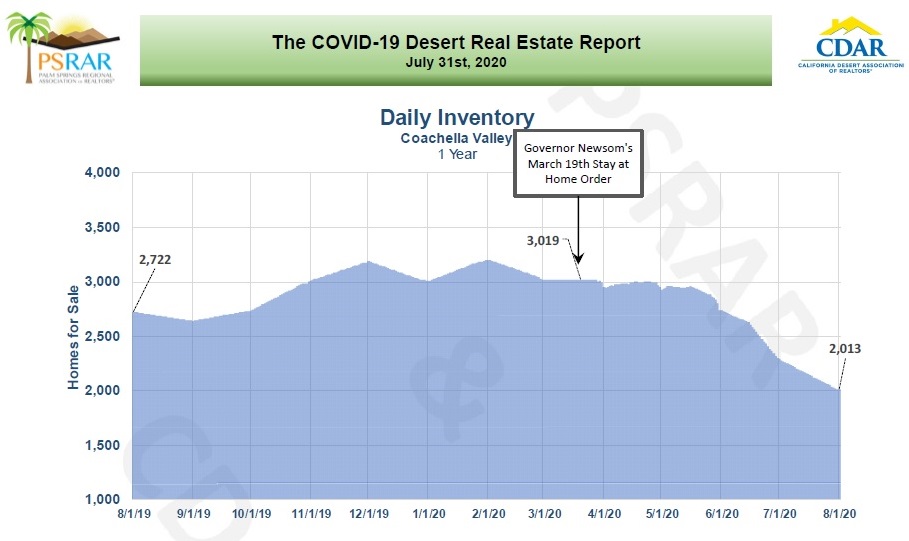 Average daily Coachella Valley housing inventory on August 1st was 2,013 homes (compared with 2,722 homes one year ago). Since the March 19th start of the California stay at home order, Market Watch noted that housing inventory has dropped 1,000 units or 33%. They went on to note that with surging sales and record low inventory the Coachella Valley housing market has entered a phase where it is not uncommon for sellers to get multiple bids. Further, they noted that surging sales and record low inventory coupled with record low interest rates, was creating an unparalleled overbalance of demand versus supply, which should soon translate into much higher prices. 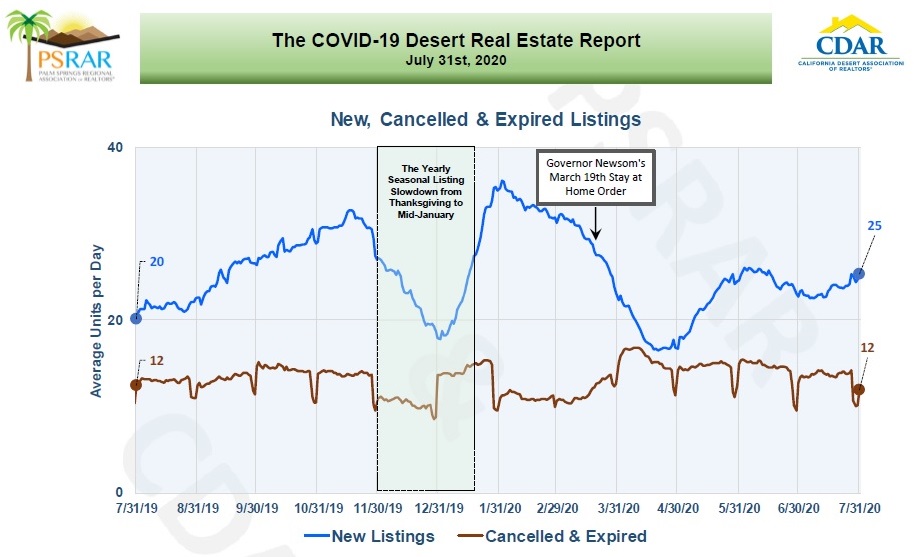 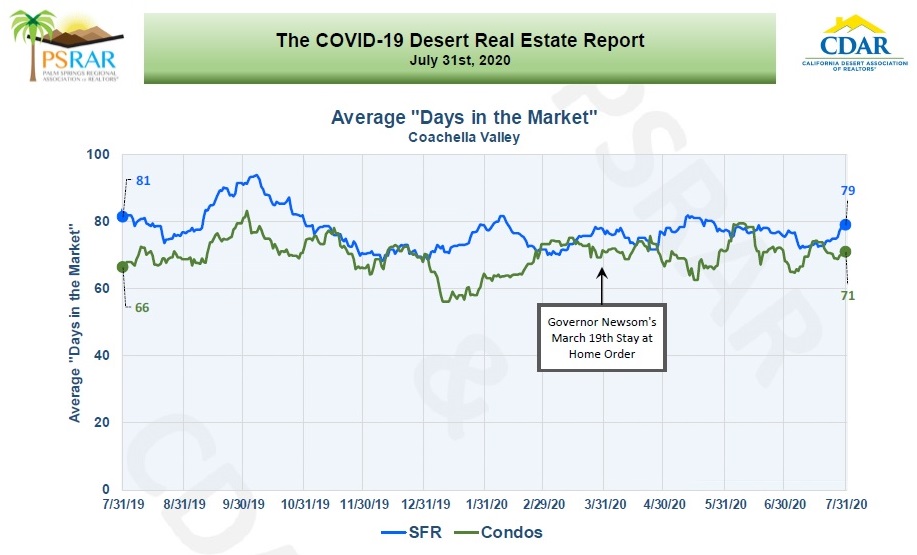 The number of days in the market for both single-family residences and condominiums shows little change over the last four months, as well as over the entire year. 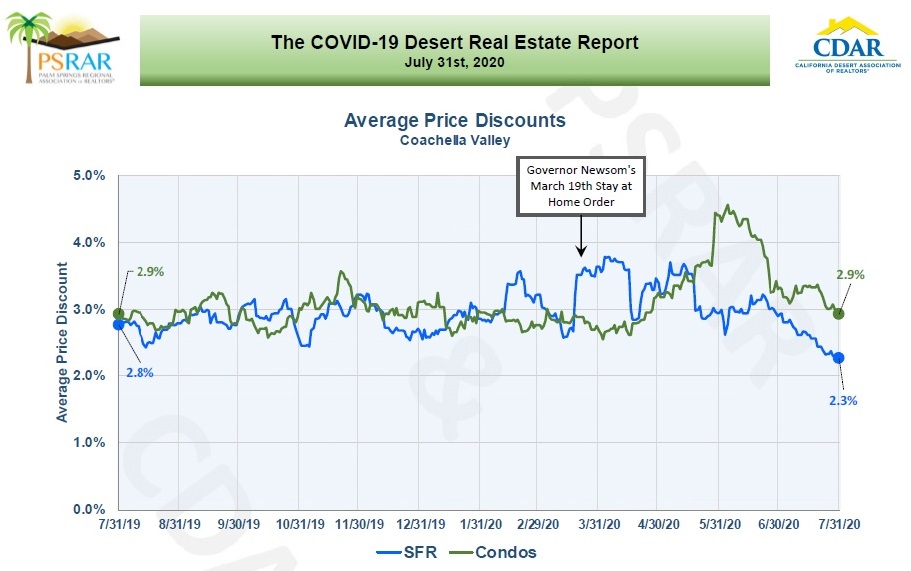 Lastly, Market Watch noted that the data showed that price discounts have been getting smaller for the last two months. On a year-over-year basis discounts for condominiums remain unchanged at 2.9%. The discount for detached homes has fallen to 2.3% on July 31st from 2.8% one year ago.