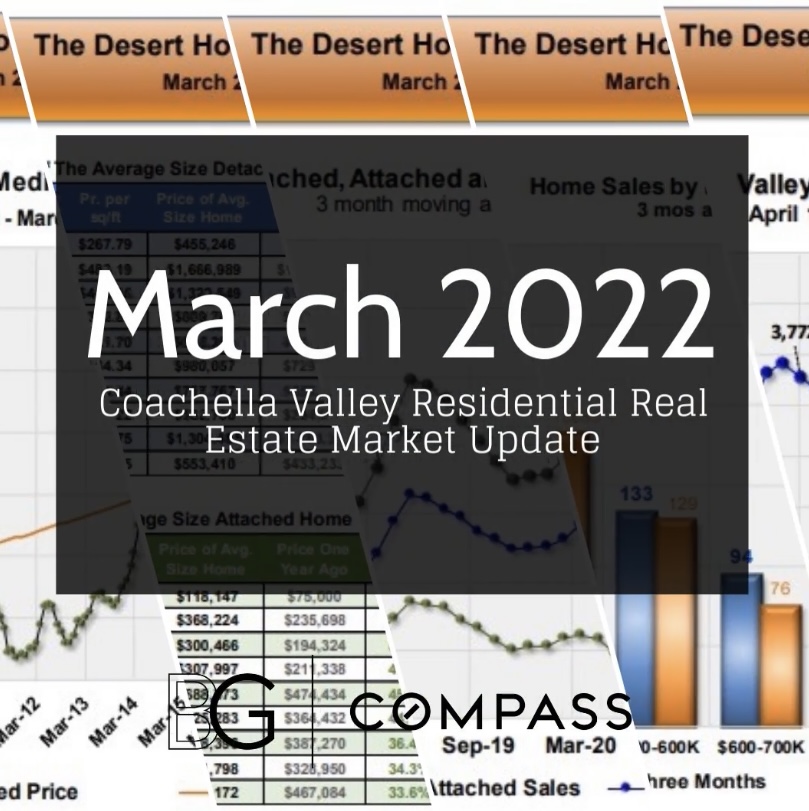 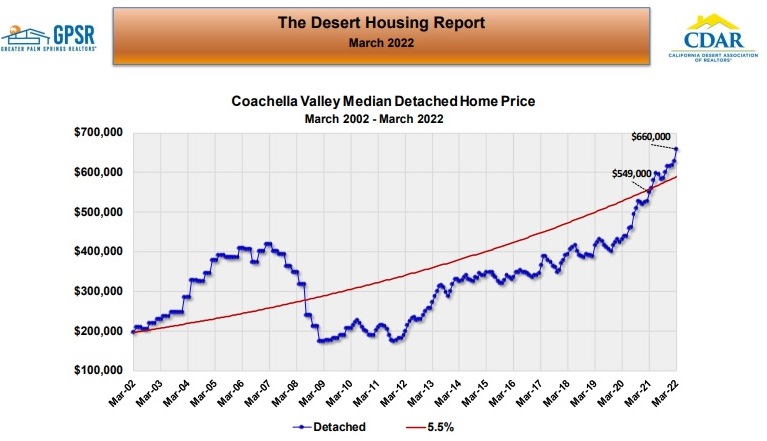 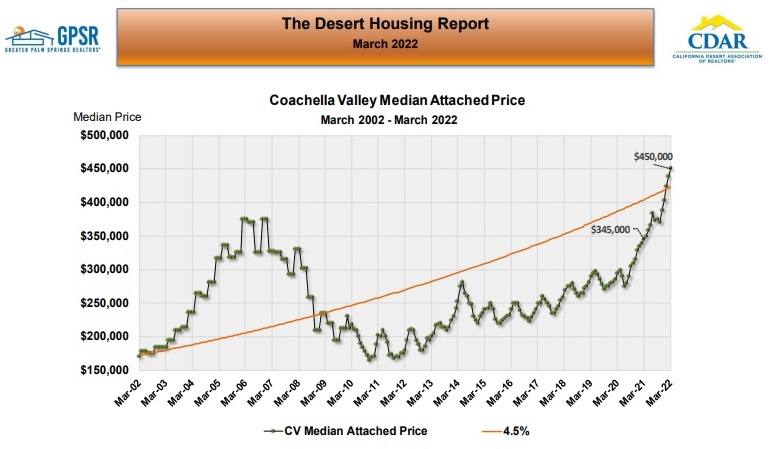 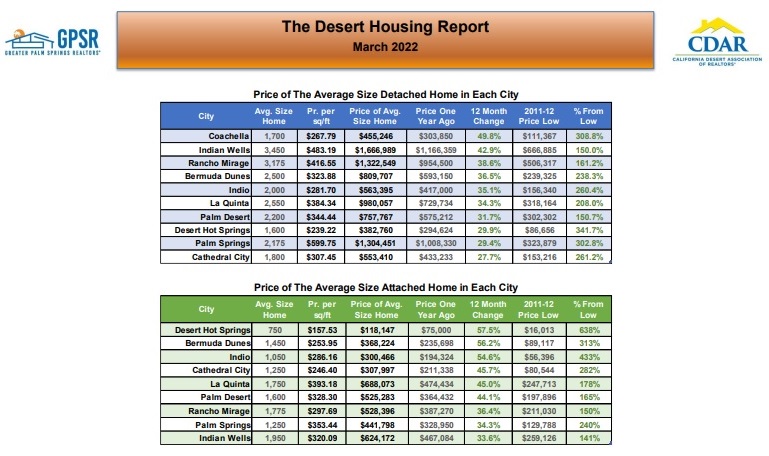 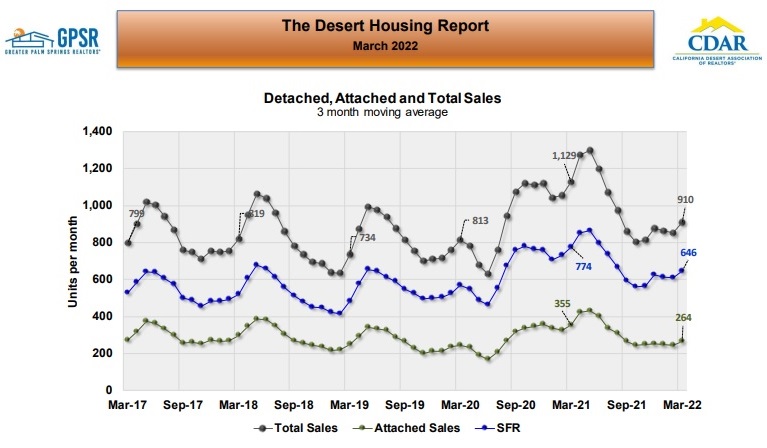 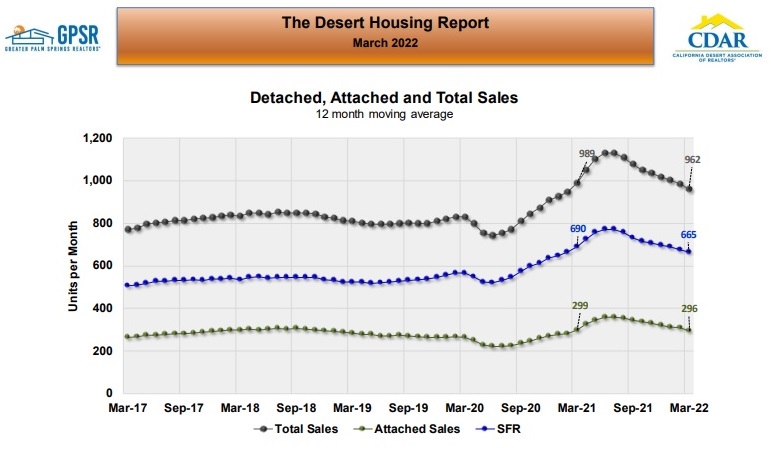 Monthly Home Sales – Twelve-Month Trailing Average: Twelve-month home sales in March (which takes out all seasonality in home sales data) averaged 962 units a month (down 2.7% from 989 total homes sales in March 2021). Sales of detached homes were down 3.6%, while sales of attached homes were almost unchanged. Market Watch expects long term home sales to continue to retreat from the highs in June 2021 because of supply restrictions due to low housing inventory. 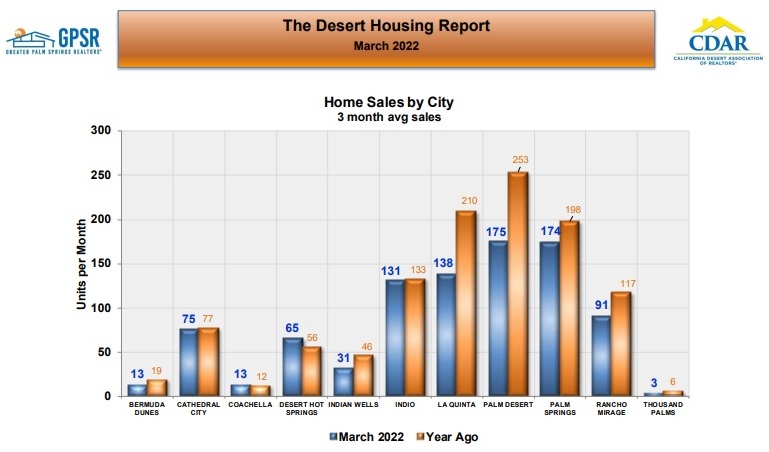 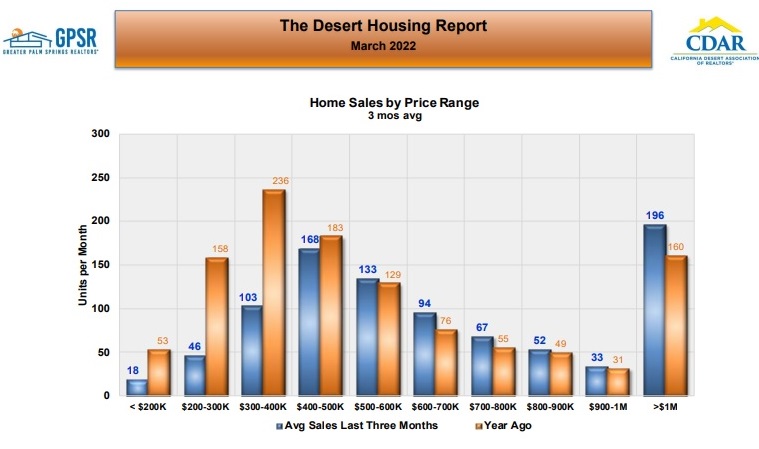 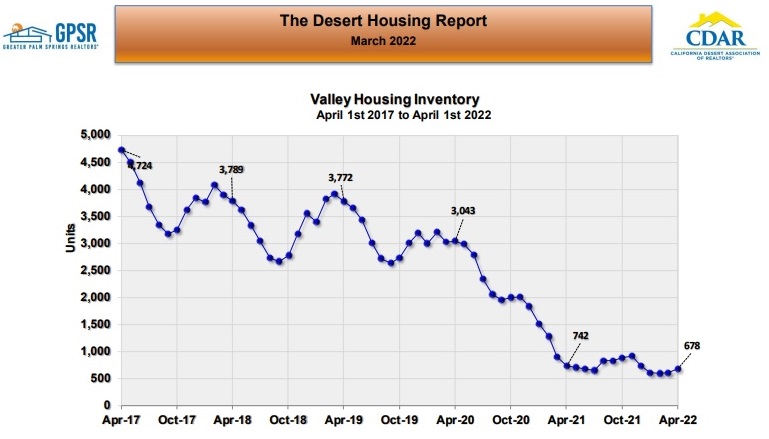 Coachella Valley Total Housing Inventory: On April 1st, the Coachella Valley total housing inventory was 678 homes (down 8.6% from April 1st 2021 and down 77.7% from April 1st 2020). Market Watch noted the absence of the usual seasonal rise in housing inventory between October and April points to even lower inventory moving toward September. Market Watch felt that it would take a surge in listings to increase inventory, but with only 1,244 new listings in March (which is just an average amount), Market Watch didn’t see it happening yet. 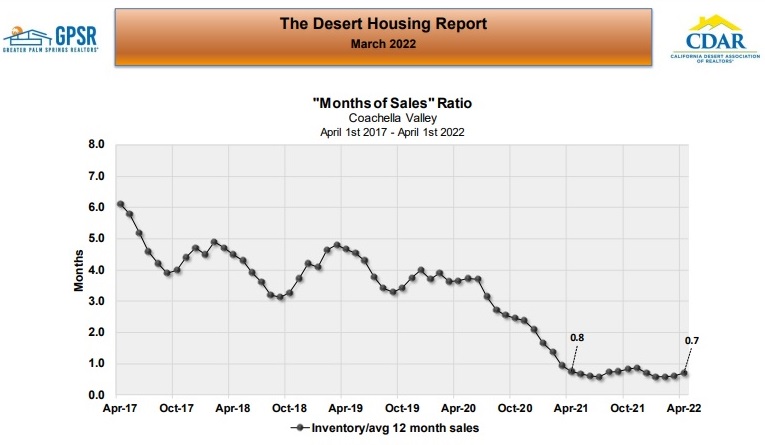 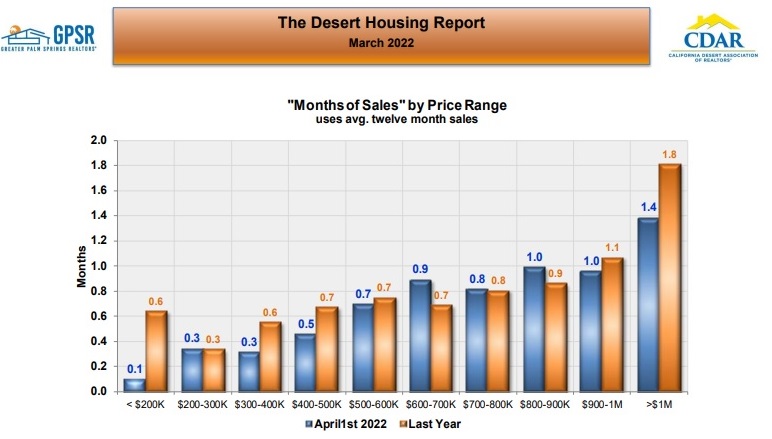 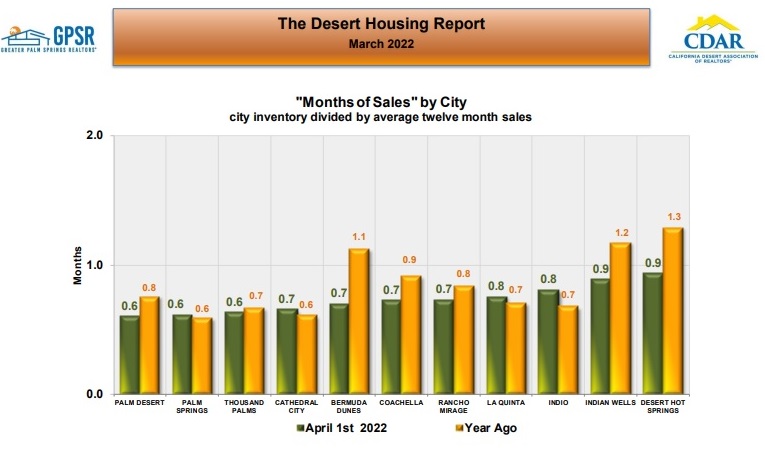 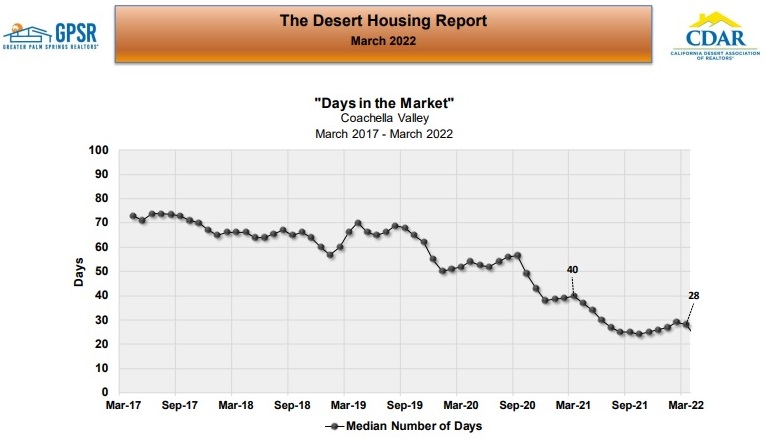 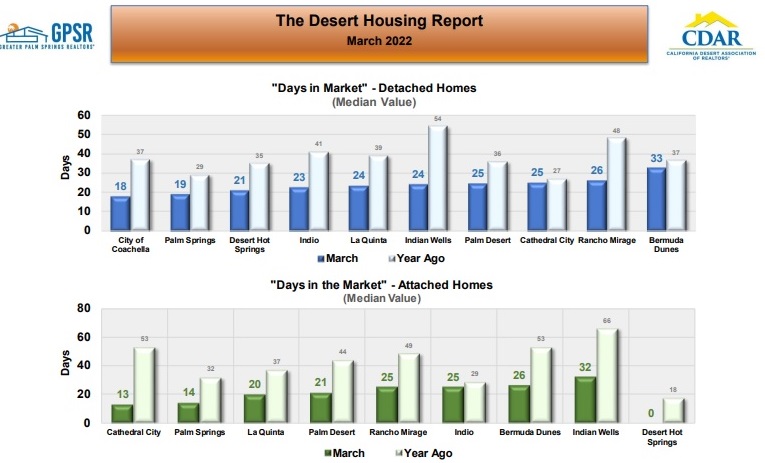 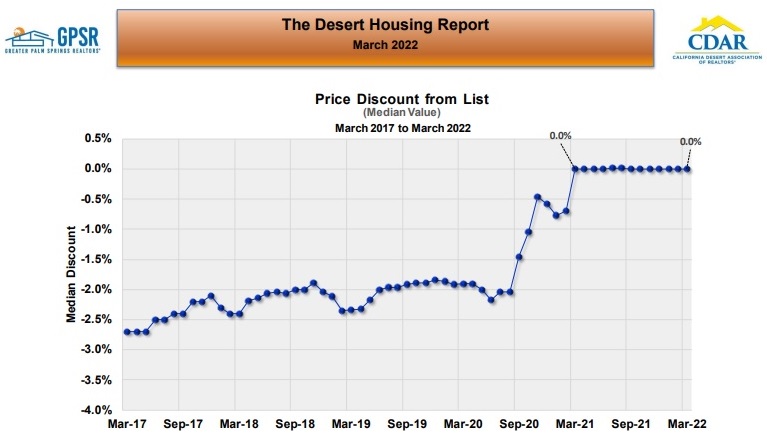 Coachella Valley Overall Price Discount: The median value for sale price discount from list for detached homes in March was again 0.0% (the same as it’s been for 12 months), due to the fact that so many homes are selling at list price. 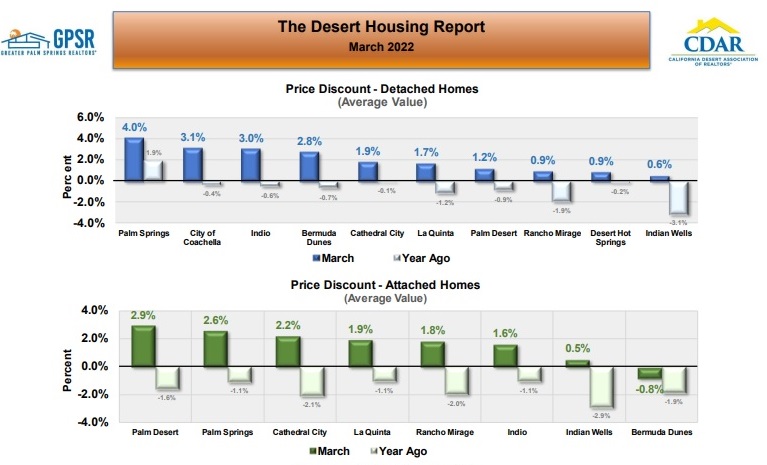 Average Price Discounts For Detached & Attached Homes By City: In March, Palm Springs had the highest selling premium for detached homes at 4%, followed by Coachella at 3.1% and Indio at 3%. In March, Palm Desert had the highest selling premium for attached homes at 2.9%, followed by Palm Springs at 2.6% and Cathedral City at 2.2%