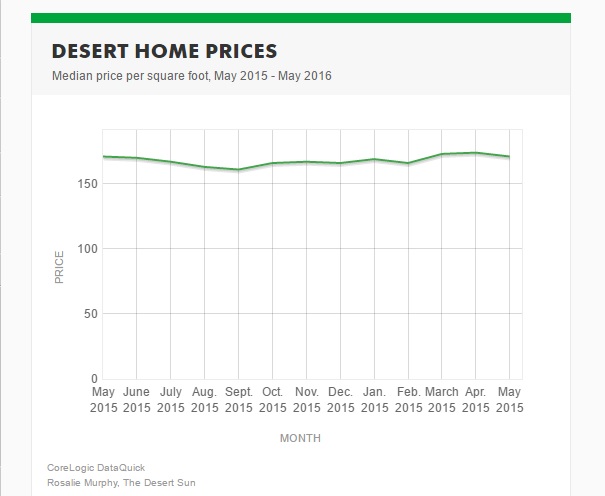 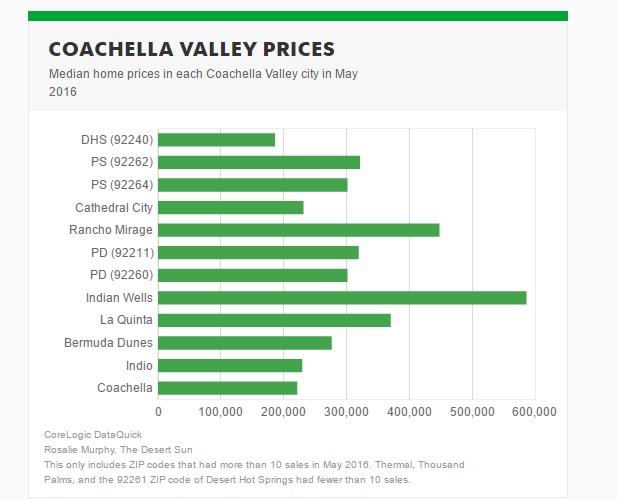 The Desert Sun’s Rosalie Murphy writes that according to data from real estate research firm CoreLogic DataQuick and the California Desert Association of Realtors, home sales and prices held steady across the Coachella Valley in May, and inventory levels continued to fall. In May, 1,032 homes were sold, a 4.8 percent increase over May 2015, at a median price of $295,000, up less than one percent year-over-year.

Rosalie notes that despite winter concerns about the weak Canadian dollar and high levels of inventory, real estate agents, at least in Palm Springs and in the high-end market, are pleased with how 2016 is shaping up. Sales were steady in May despite a dramatic drop in new construction home sales. Just 34 new homes sold in May; the last three months saw 60 new homes sold on average per month. Year-over-year, new home sales fell 52 percent.

Rosalie writes that inventory, the number of homes on the market, also fell in May. There were 3,990 single-family homes and 1,866 condos on the market during May, a 7 percent drop from the previous month, according to the California Desert Association of Realtors. Jim Webb, president of the Palm Springs Regional Association of Realtors and an agent with Windermere | Leaskou Partners is quoted as saying "The good stuff, if it's priced right, is selling. The crap is sitting on the shelf."  He further added “The problem with homes that are not selling more often than not has to do with price."

Indian Wells, La Quinta, Palm Desert, Palm Springs and Rancho Mirage had homes sell for more than $1 million in May. Indian Wells homes fetched the highest prices in the desert with a median sale price of $585,000 and $229 per square foot. Median prices topped $200 per square foot in Palm Springs and Rancho Mirage as well. On the other end of the spectrum, 58 homes sold in Desert Hot Springs' 92240 ZIP code for a median price of $184,500, or $114 per square foot, the lowest in the desert.