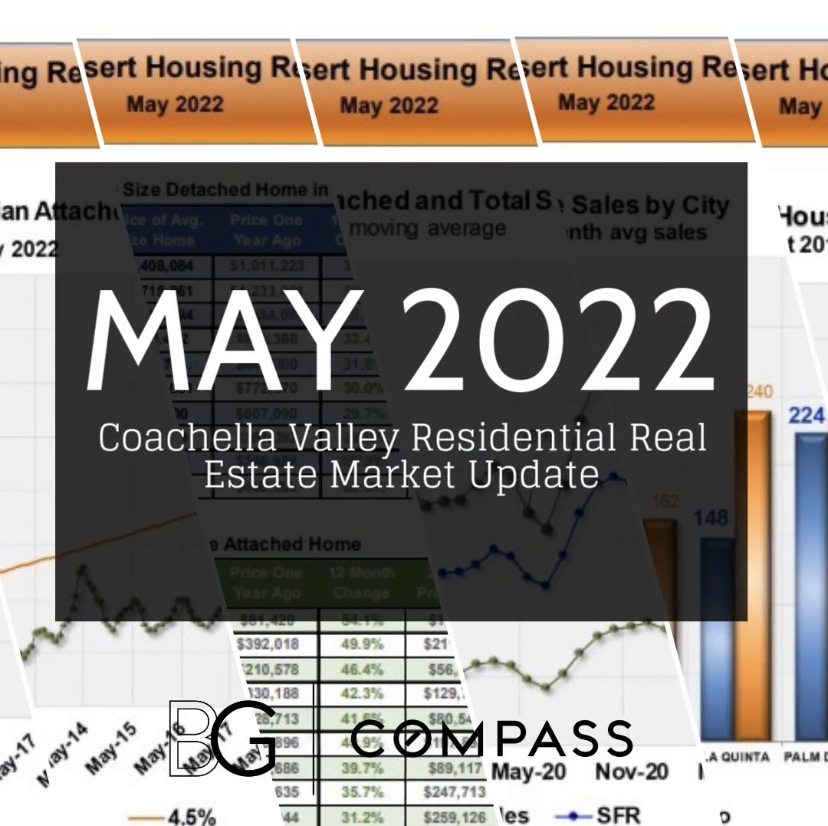 Our local real estate market experts have just released their May 2022 Desert Housing Report. Some highlights: 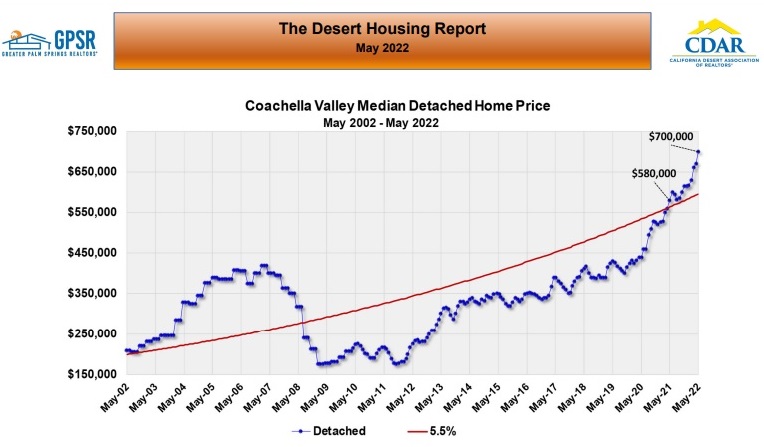 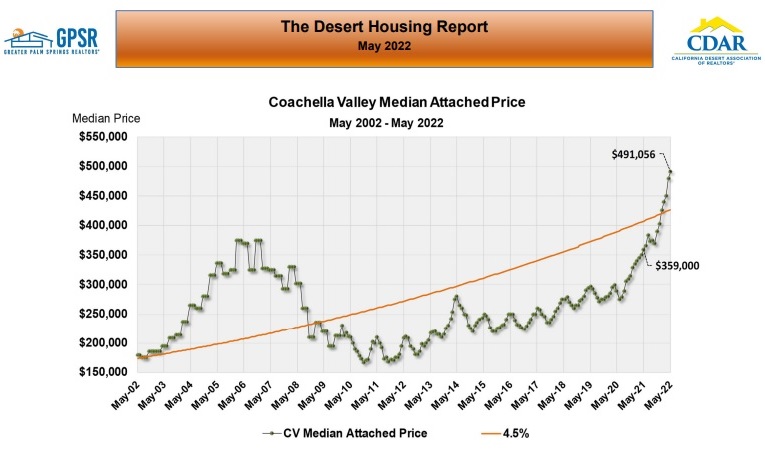 COACHELLA VALLEY ATTACHED HOME MEDIAN PRICE:  At the end of May, the median price of an attached home in the Coachella Valley was $491,056, (up 2.4% or $11,606 from $479,450 in April and up 36.8% or $132,056 from $359,000 in May 2021). Market Watch noted that attached home median prices have been on a tear, but expect price gains to slow due to traditional seasonal factors and increasing inventory. If we were to follow the normal seasonal pattern, attached home median prices should peak sometime next month and then settle back. But Market Watch added that these are not normal times. 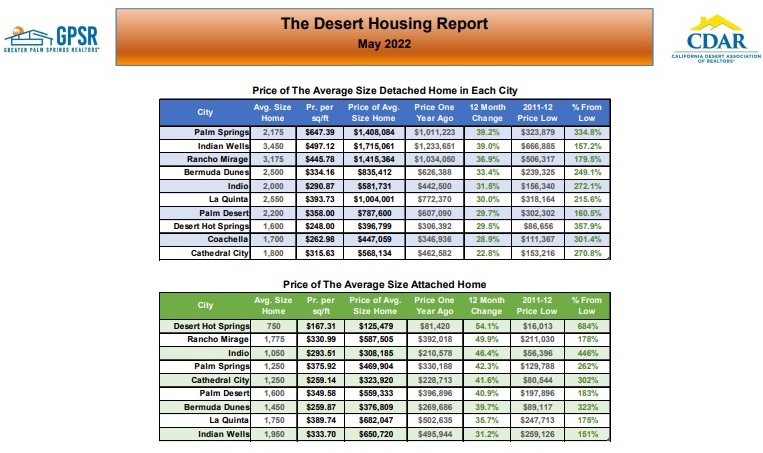 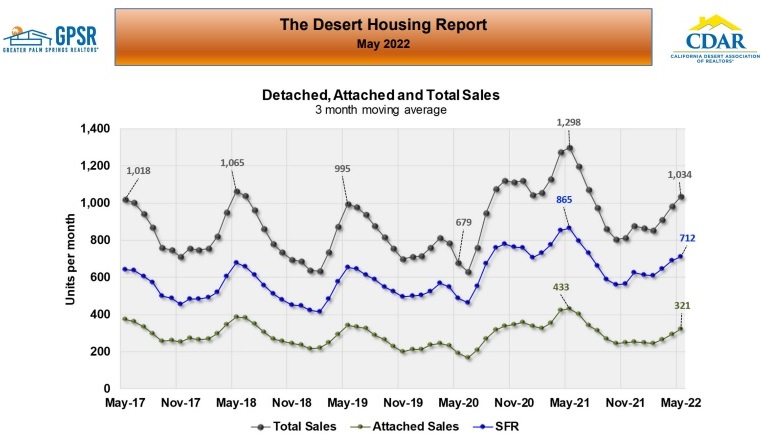 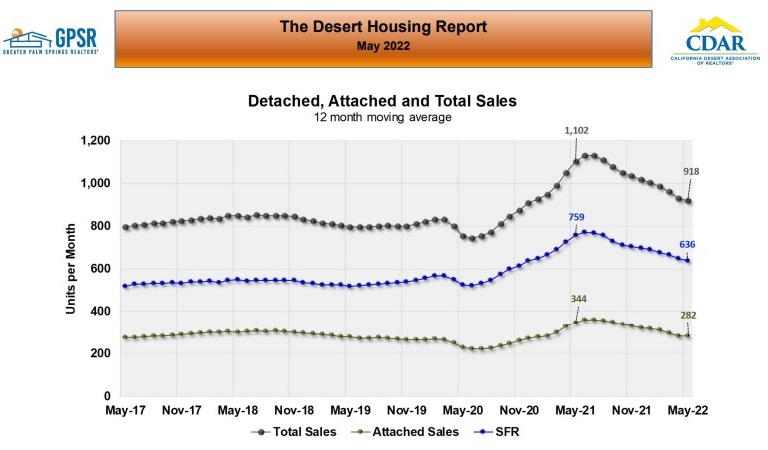 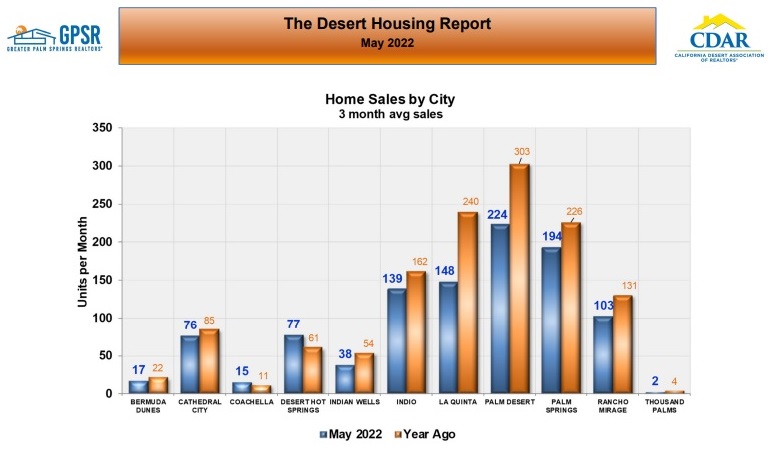 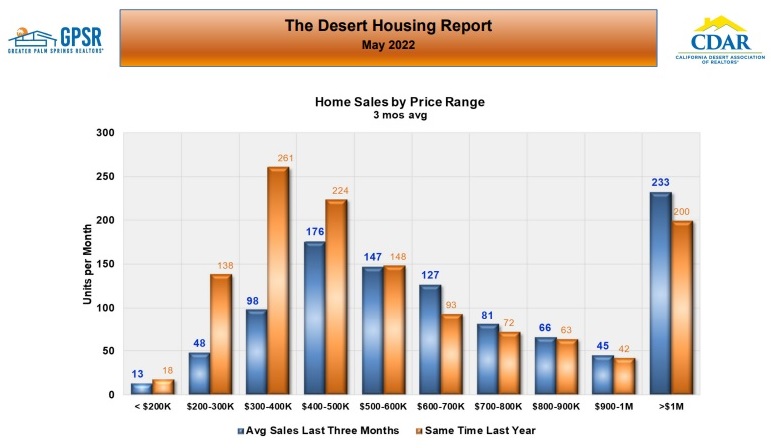 COACHELLA VALLEY HOME SALES BY PRICE RANGE: Market Watch pointed out that the 20% decrease in total Coachella Valley home sales is not evenly distributed across all price ranges. The vast majority of the decline in home sales is occurring in those homes priced under $500,000 (mainly due to more homes now being priced in the higher price ranges). Sales of homes priced over $600,000 increased year-over-year simply because there are so many more homes currently priced in this price range. In fact, sales of homes priced between $600,000 and $700,000 were up 36.6% year-over-year and sales of home priced over $1,000,000 were up 16.5% year-over-year. 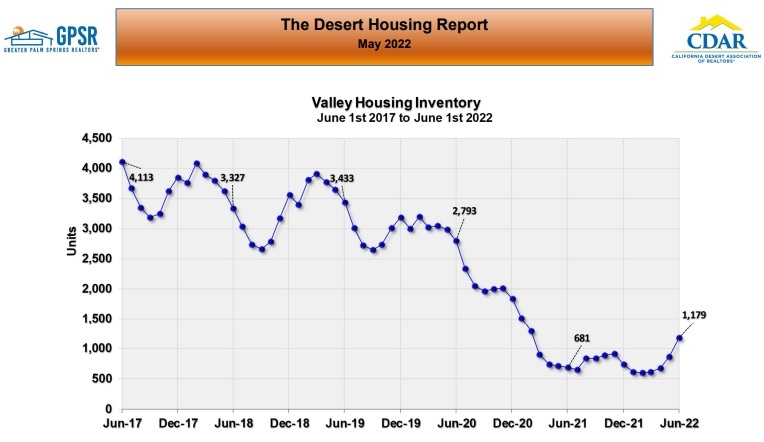 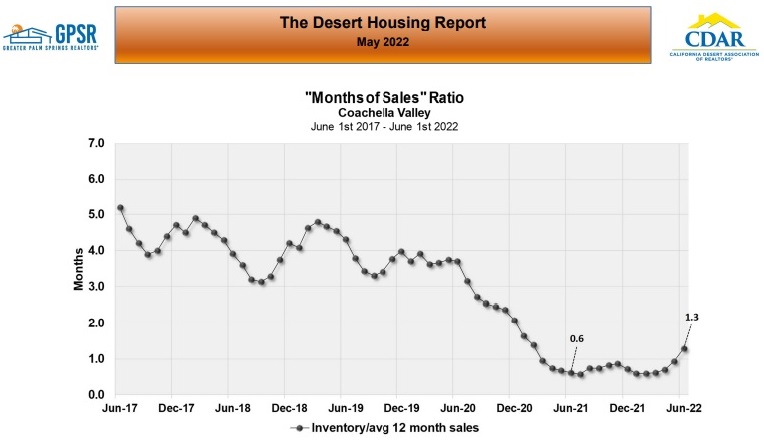 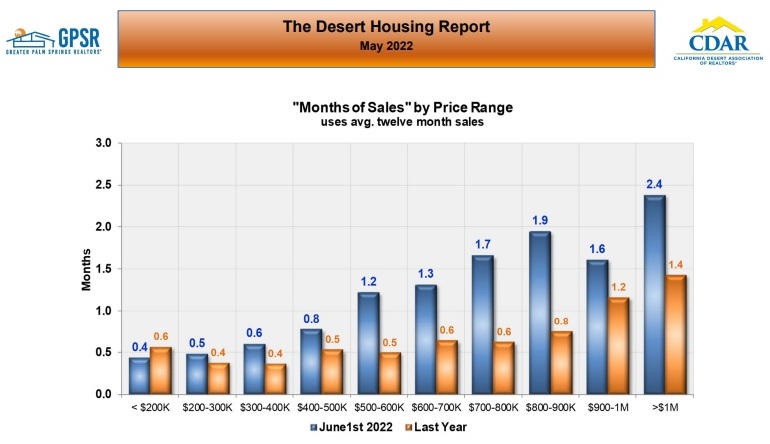 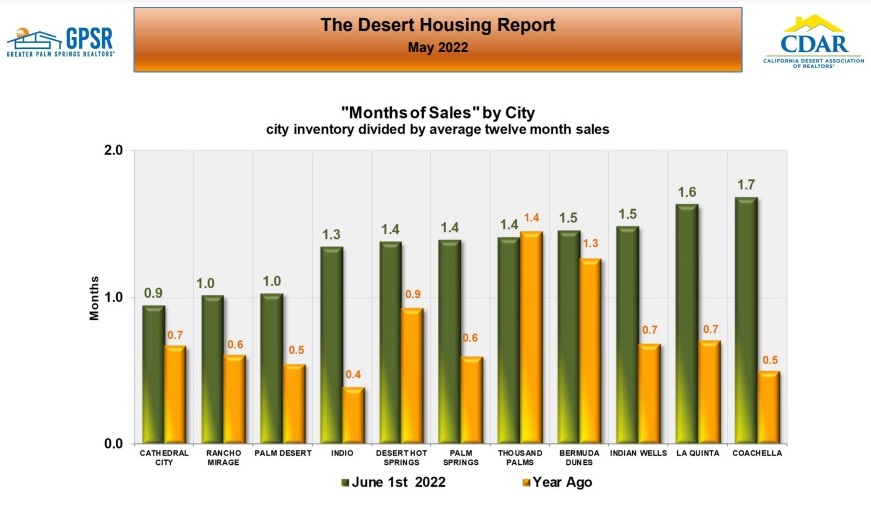 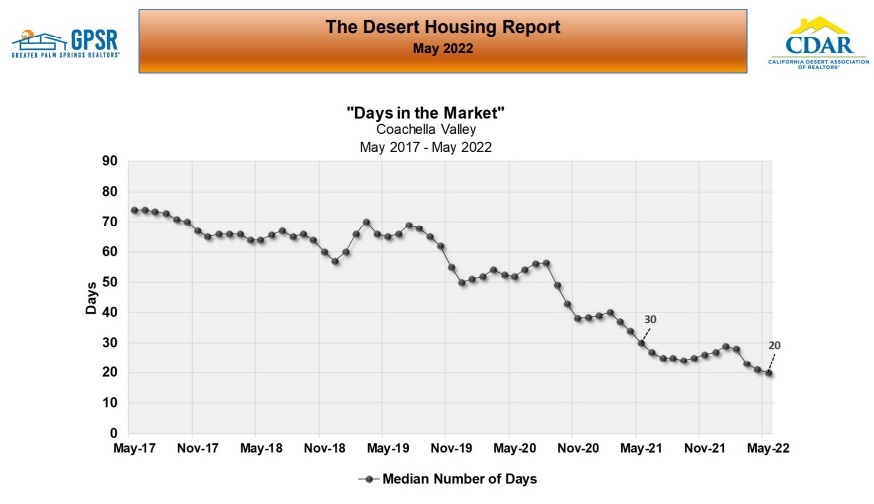 COACHELLA VALLEY DAYS IN THE MARKET: At the end of May, the median number of days in the market throughout the entire Coachella Valley was 20 days (one day less than last month and 10 days less than one year ago). Market Watch noted that low home inventory continued to keep selling times near current, low levels. Further, with inventory rising and sales contracting, Market Watch expects days in the market to remain around 20 to 25 days. 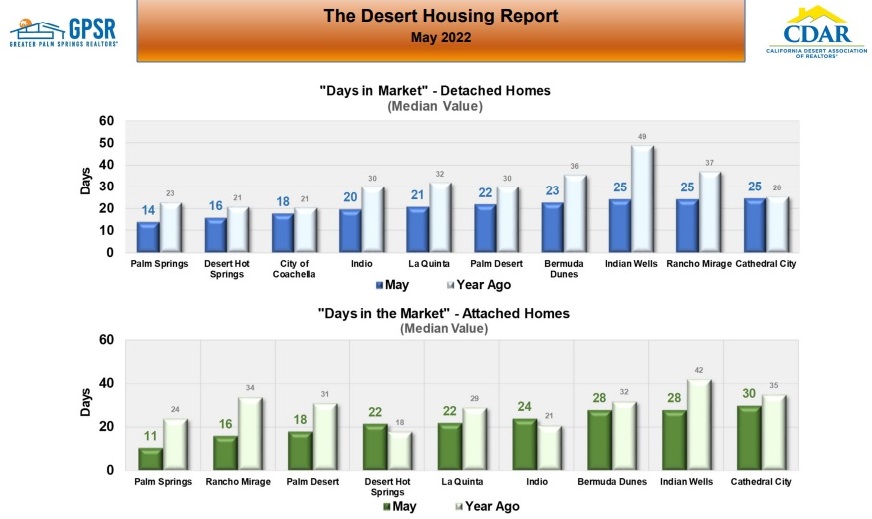 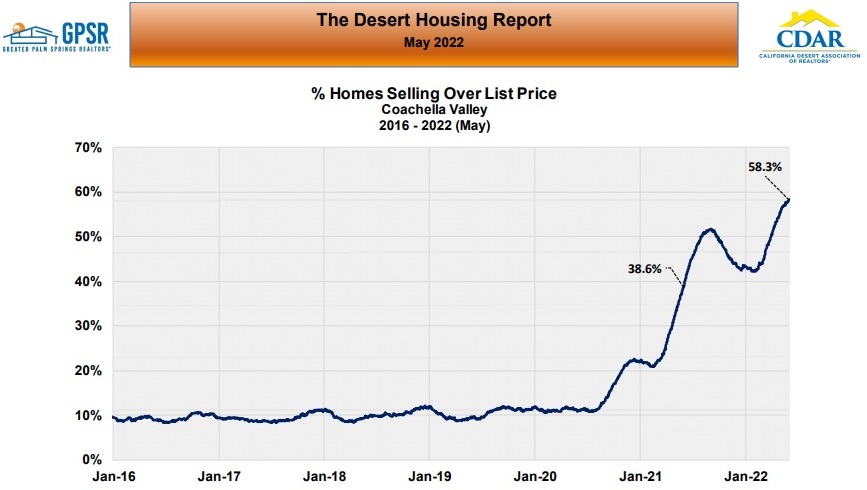 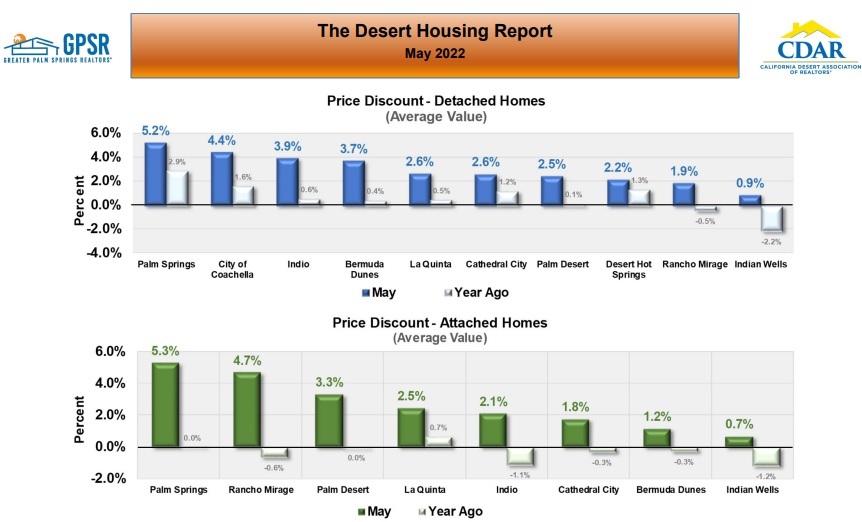