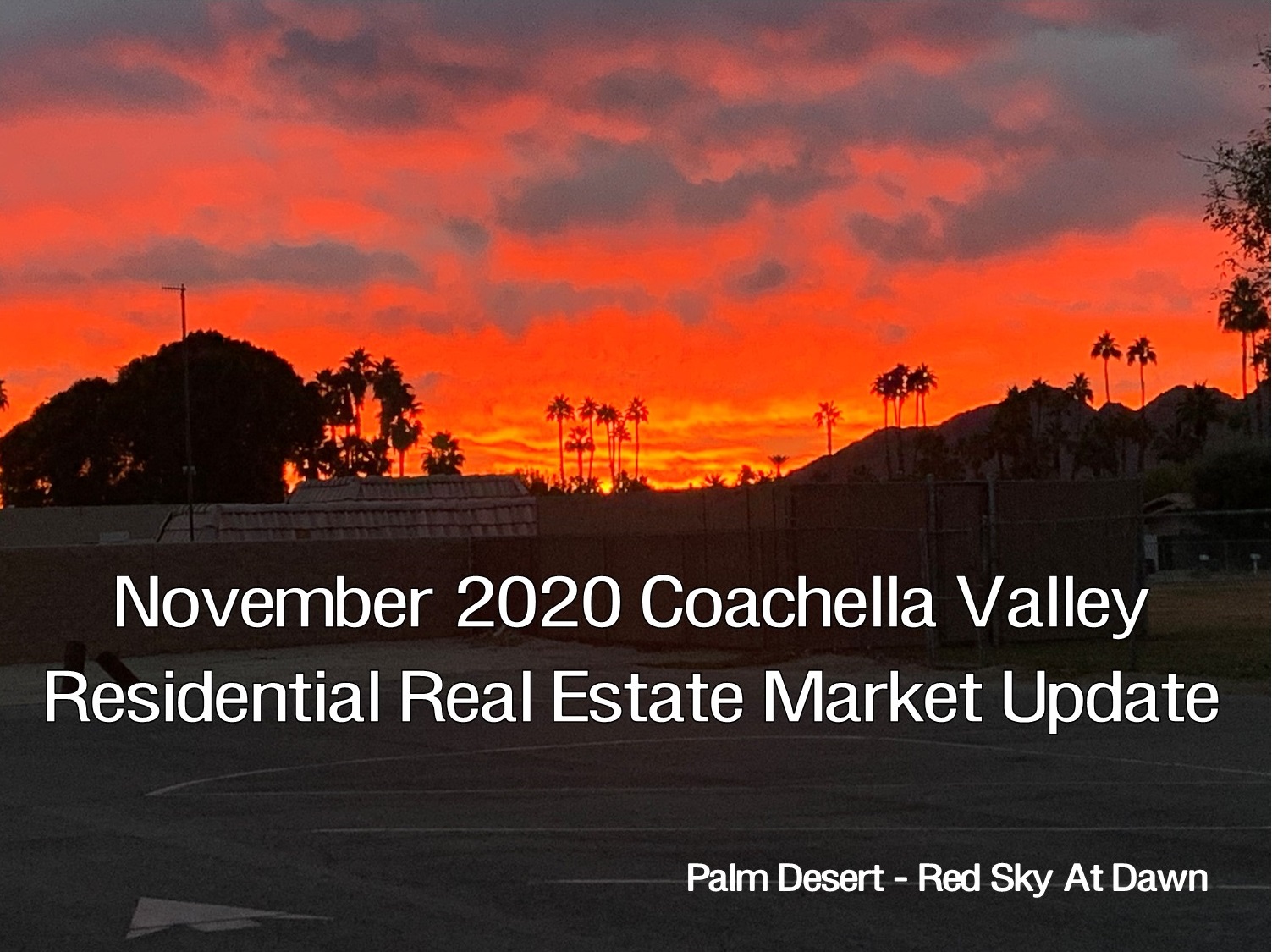 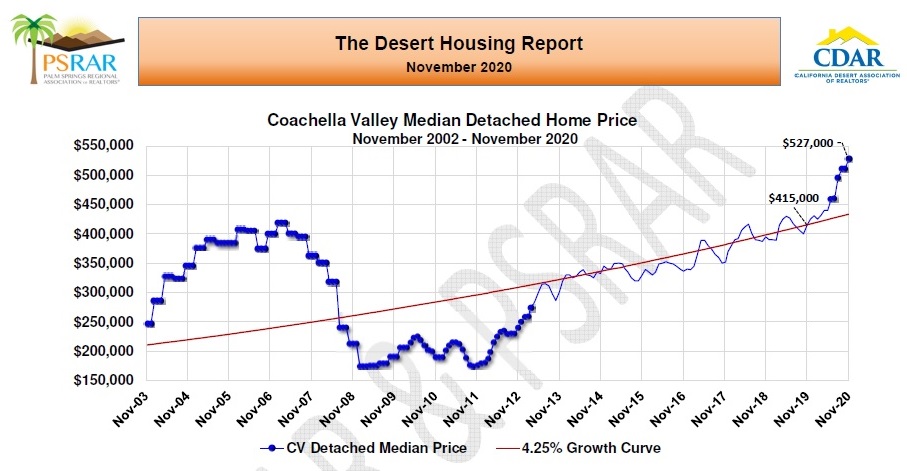 The Coachella Valley detached home median price in November was $527,000 (an increase of 27% year-over-year). 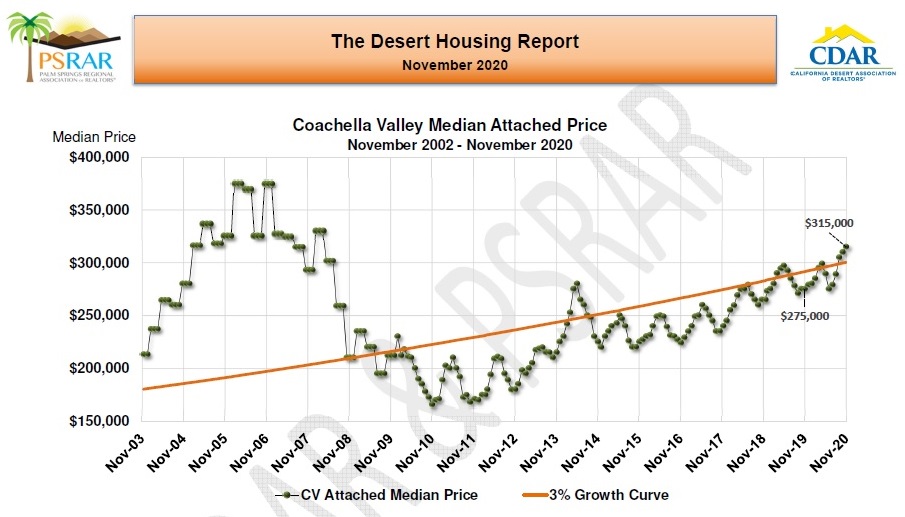 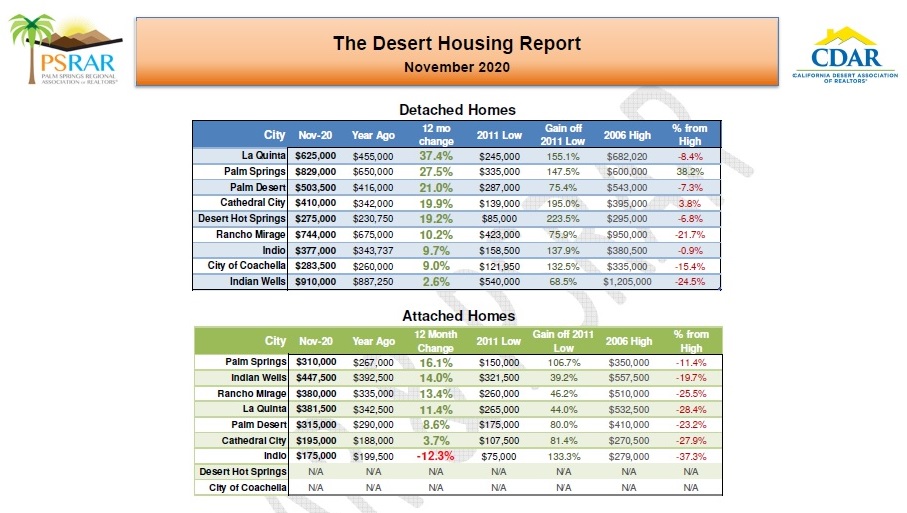 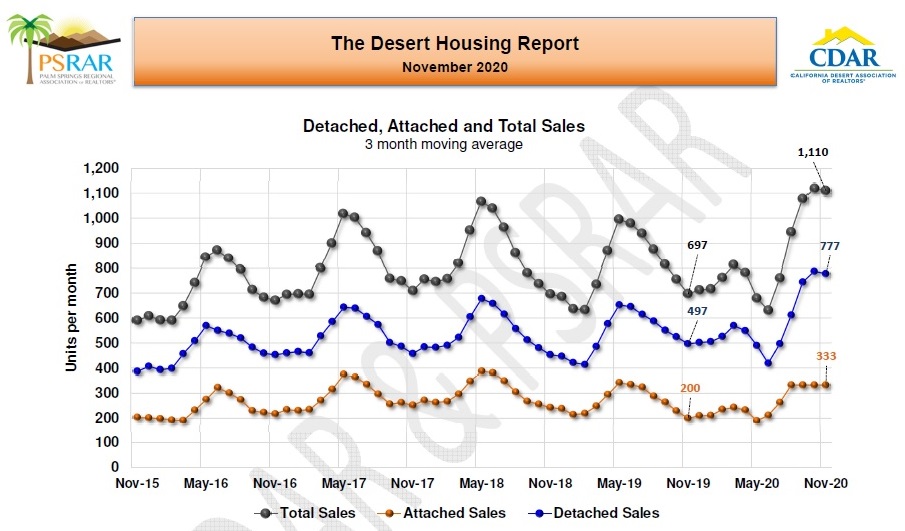 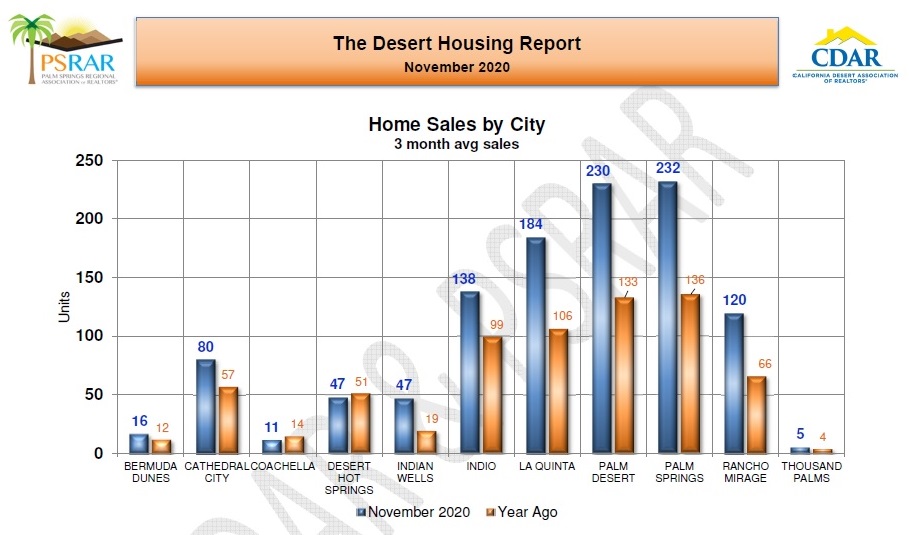 Average three-month home sales increased in nine of the 11 Coachella Valley cities studied. In particular, home sales increased year-over-year by 147.4% in Indian Wells, 81.8% in Rancho Mirage, 73.4% in La Quinta, 72.9% in Palm Desert and 70.6% in Palm Springs. Home sales in the job oriented communities of Cathedral City and Indio increased year-over-year but by smaller percentages and decreased slightly in Desert Hot Springs and Coachella. 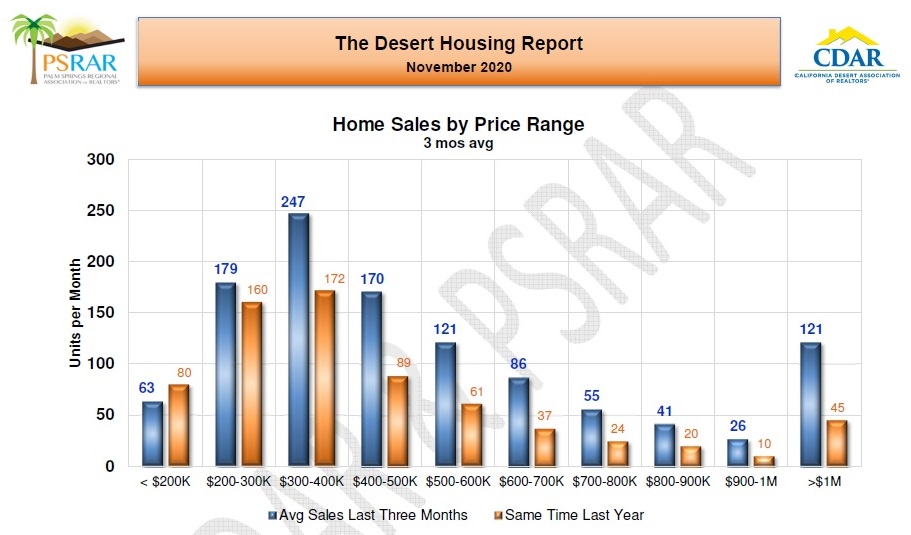 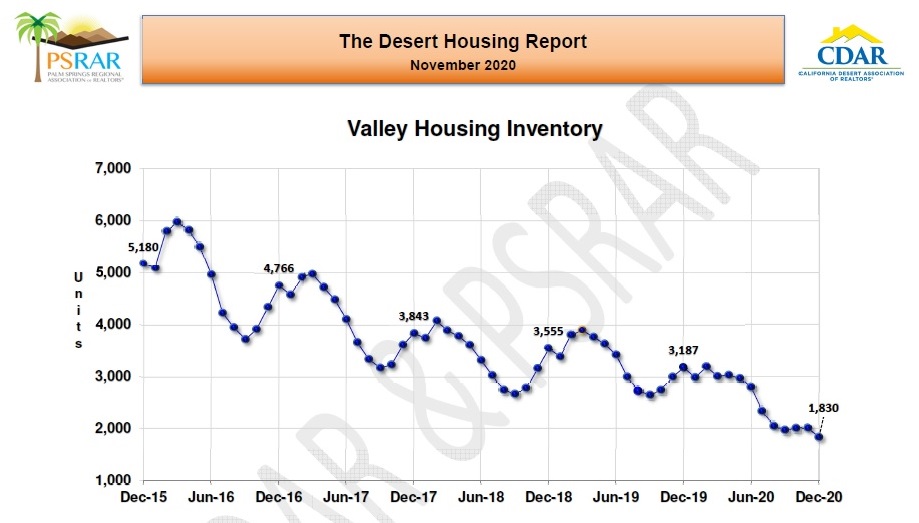 Coachella Valley housing inventory stood at 1,830 homes on December 1st (down 42.6% year-over-year). Market Watch noted that based on past trends, listings normally would have been increasing over the last two months. The fact that this hasn’t happened this year lead Market Watch to forecast continued tight inventories moving into the new year and new selling season. 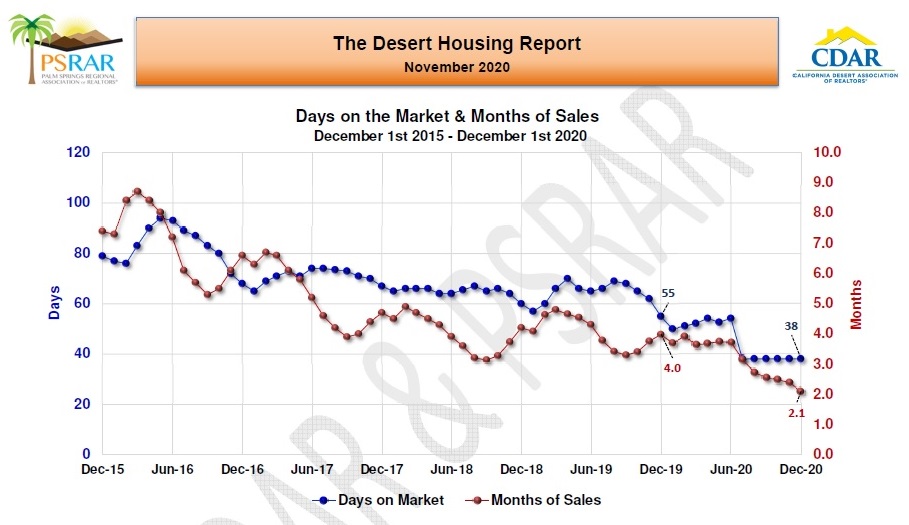 Market Watch explained that the months of sales ratio (inventory divided by the sales rate) measures how many months it would take to sell off the entire housing inventory at the current sales rate and is the most accurate indicator of supply versus demand that real estate markets have. At 2.1 months, Market Watch noted that the current months of sales ratio is the lowest in Coachella Valley history (almost 50% less than one year ago). They felt that this indicates demand currently far exceeds supply, which should result in a continuation of higher prices. The median value of days in the market in November was 38 days (compared to 55 days one year ago). 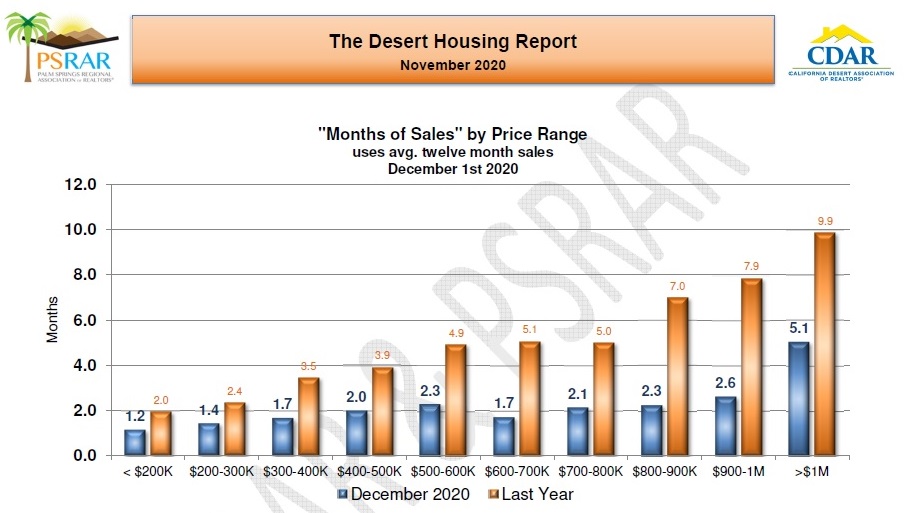 The months of sales ratio was lower in every price bracket than one year ago, but especially so in the higher price brackets. Market Watch noted that months of sales ratios in all price ranges up to the $900,000 to $1,000,000 range were running around two months. Only in the case of homes priced over $1 million did the ratio rise (to 5.1 months). Market Watch commented that this shows that the Coachella Valley housing market is strong in all price ranges, but particularly in the higher price ranges. 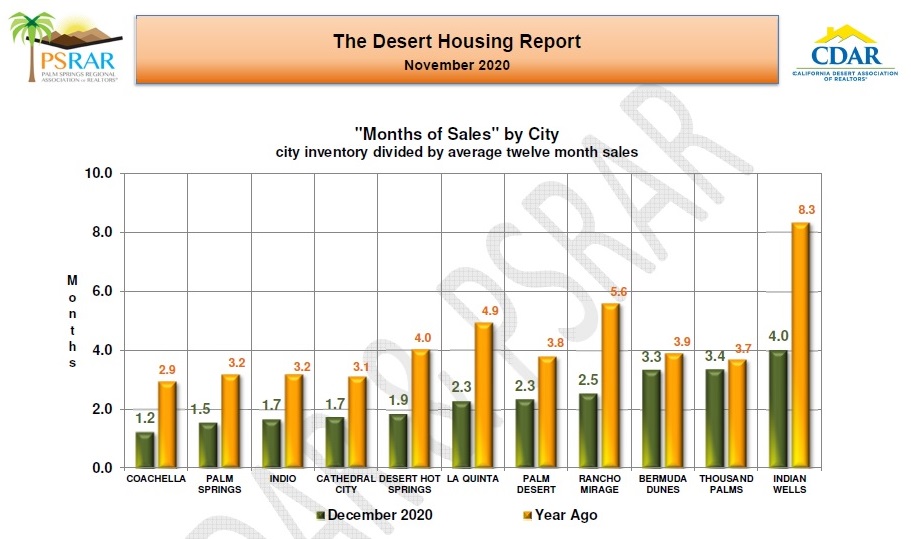 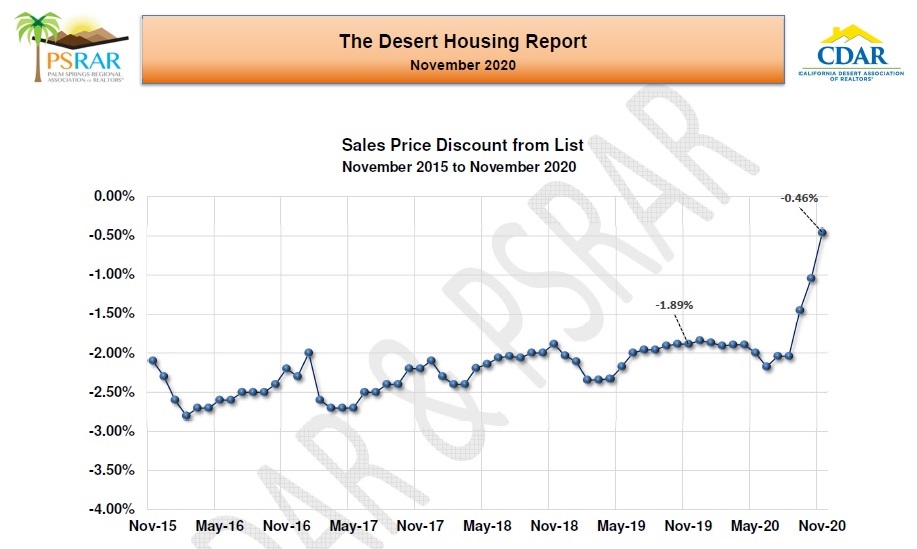 The November median sale price discount from list was -0.46% which implies that an average house offered at $500,000 sold for $497,700. Market Watch pointed out that one of every four sales are now selling for more than their asking price.