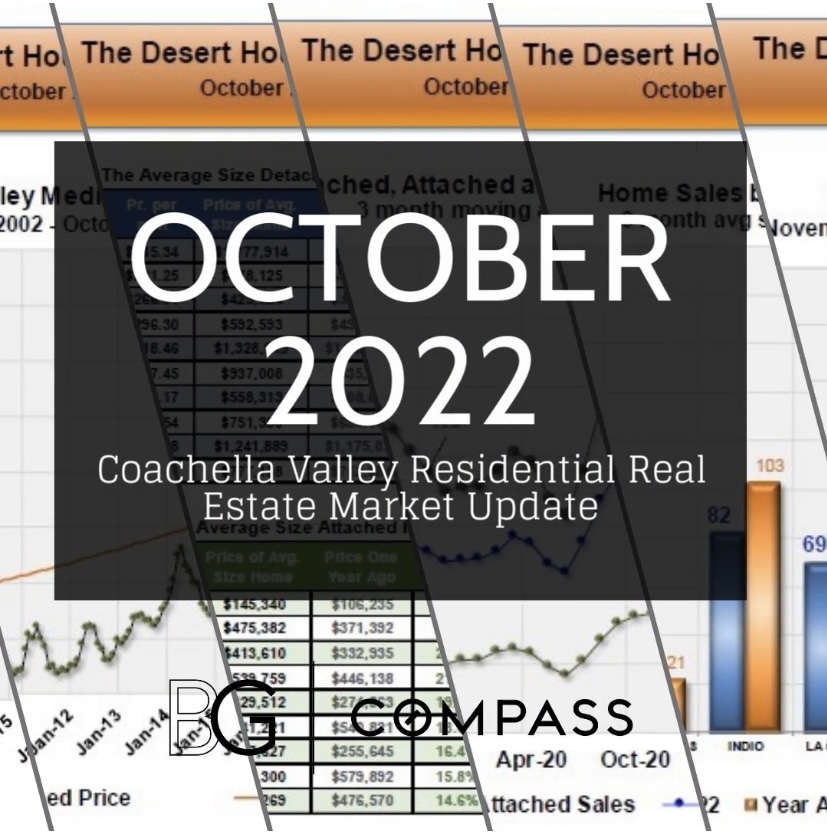 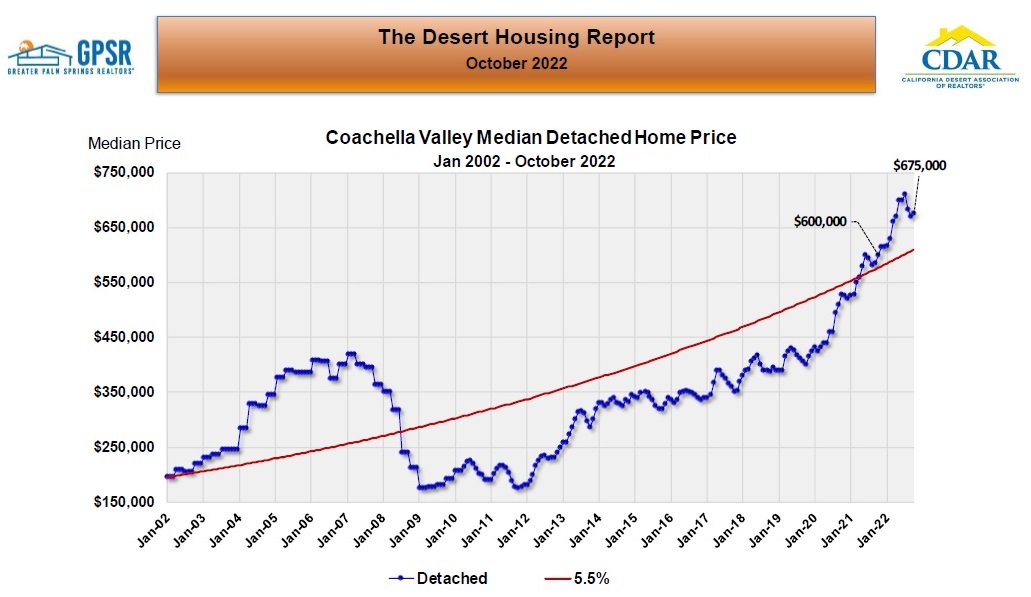 COACHELLA VALLEY OCTOBER DETACHED HOME MEDIAN PRICE: The detached home median price in the Coachella Valley in October was $675,000 (up $5,000 or 0.75% from $670,000 in September and up $75,000 or 12.5% from a median price of $600,000 in October 2021). Market Watch noted that the data shows that home price correction that many have feared has been relatively mild in the Coachella Valley to date. In fact, they pointed out that some of the price correction over the last couple of months is just the historical seasonal correction at play. However, they also stated that it is hard to ignore the effect of higher interest rates on both buyers and seller. 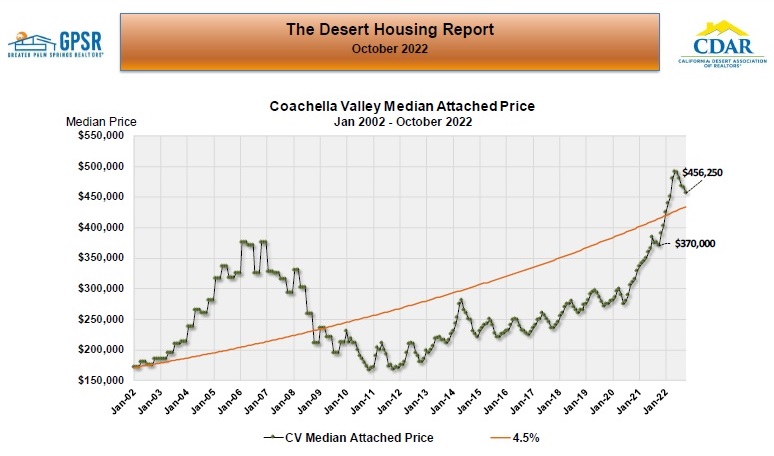 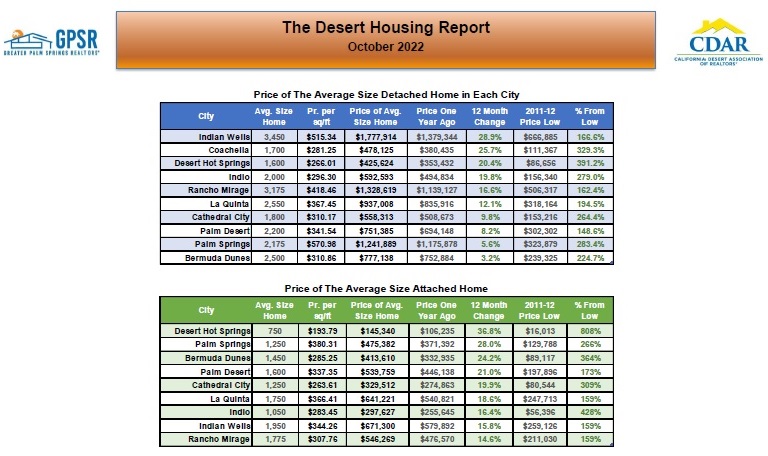 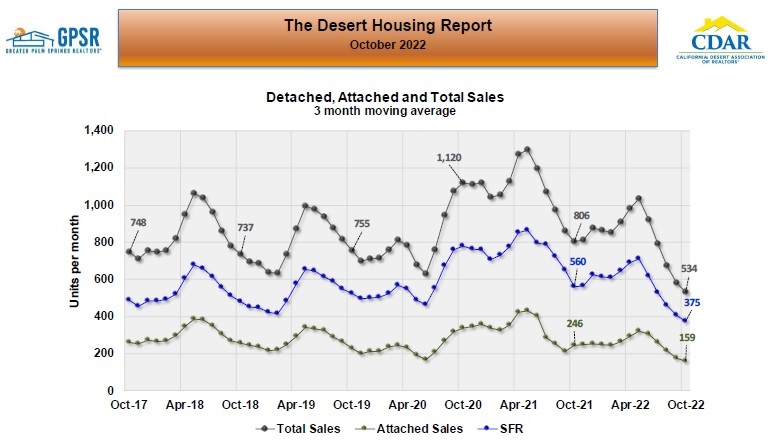 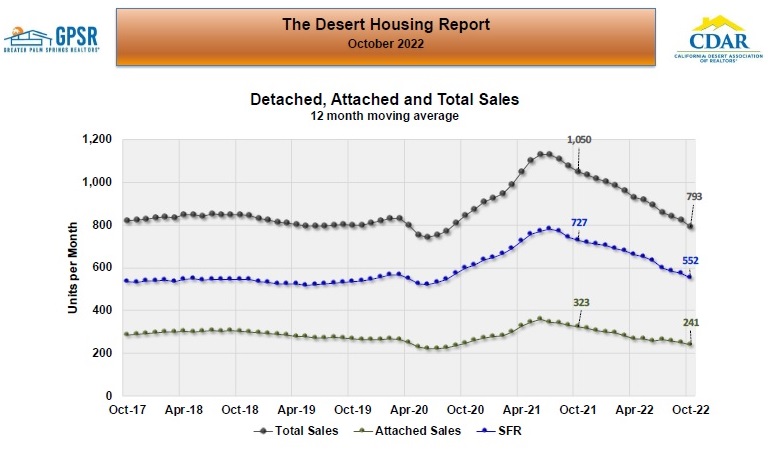 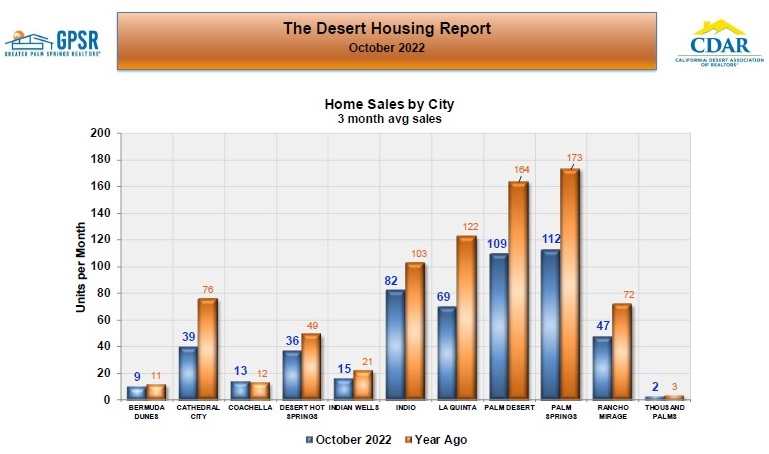 OCTOBER COACHELLA VALLEY HOME SALES BY CITY: Market Watch pointed out that home sales decreased in every Coachella Valley city other than Coachella. Home sales decreased by 48.7% year-over-year in Cathedral City, 43.4% in La Quinta and 35.3% in Palm Springs. 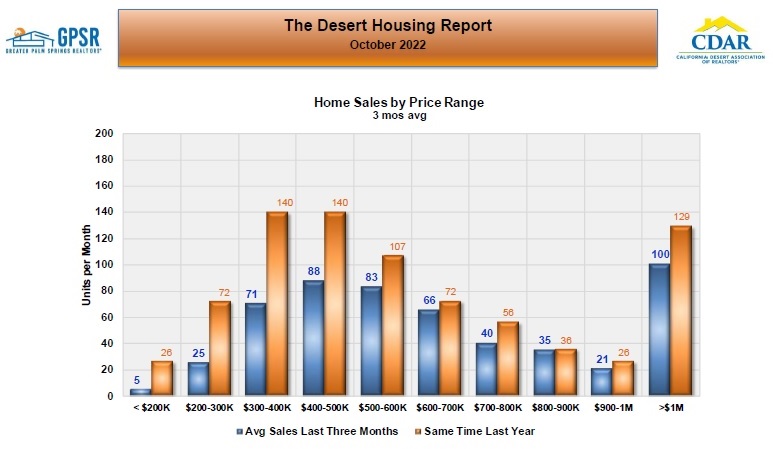 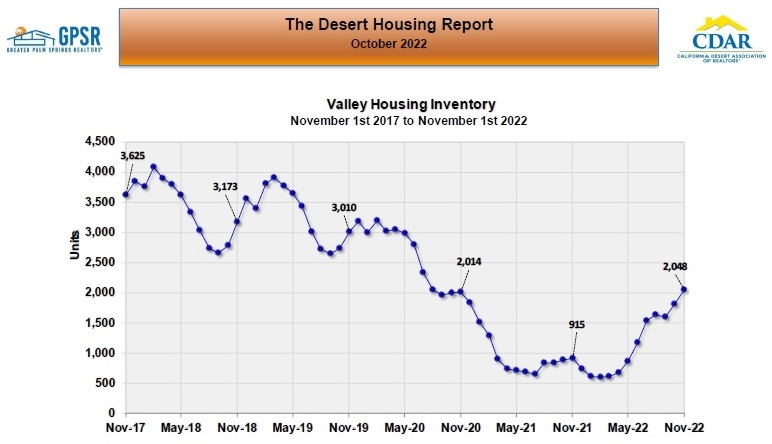 COACHELLA VALLEY HOME INVENTORY: On November 1st, Coachella Valley home inventory was 2,048 homes (up 241 homes or 13.3% from 1,807 homes on October 1st and up 1,133 homes or 123.8% from 915 homes on November 1st, 2021). Market Watch noted that this increase in home inventory was opposite to almost every other California region, where inventory generally declined slightly last month. Further, they noted that some of this increase in inventory was seasonal and that if the pattern continues, inventory would probably reach 2,500 units by February (compared to pre pandemic inventory norms of over 3,000 homes). 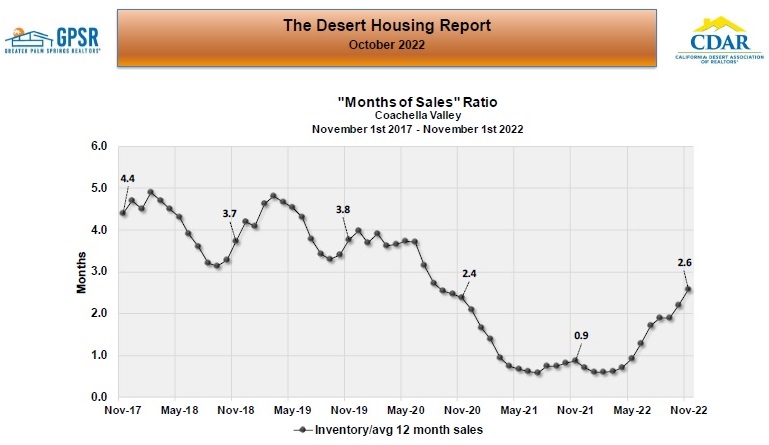 COACHELLA VALLEY REGIONAL MONTHS OF SALES RATIO: On November 1st, the Coachella Valley’s months of sales ratio was 2.6 months. While higher than September’s 2.2 months of sales, this ratio is still considerably below the 4.0 months that is historically normal for this time of year. Market Watch felt that even though the home inventory has been increasing and home sales have been decreasing, the changes have not been enough to bring the months of sales ratio back to normal levels. Market Watch went on to state that the months of sales ratio measures supply versus demand and a ratio of 2.6 still implies that the balance of supply and demand somewhat favors the seller. They felt that this has helped limit price corrections. 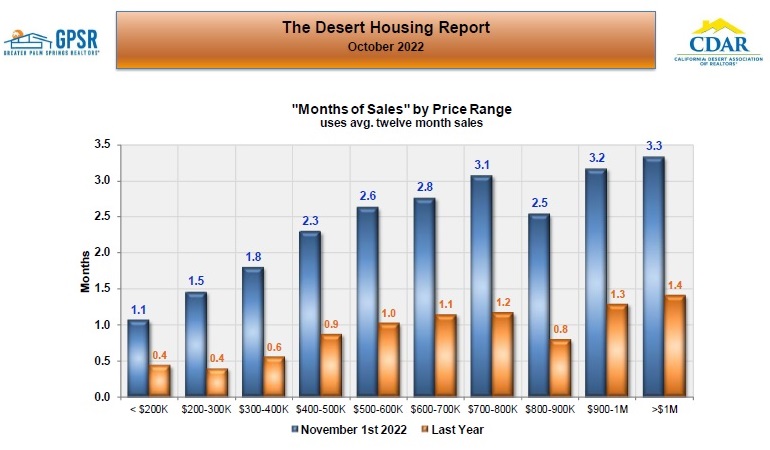 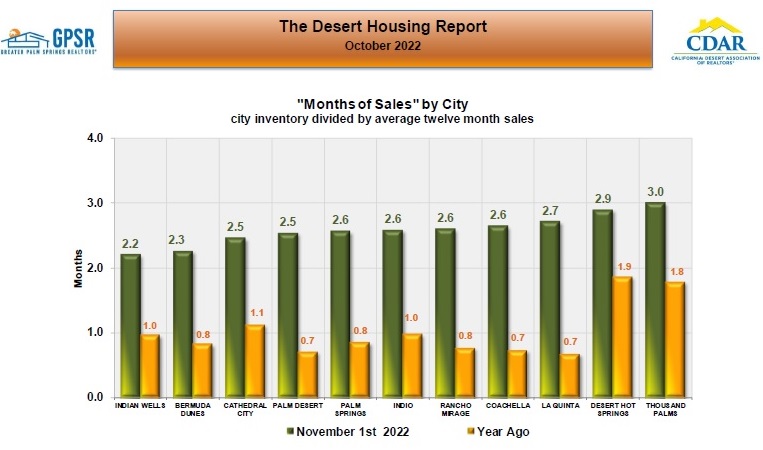 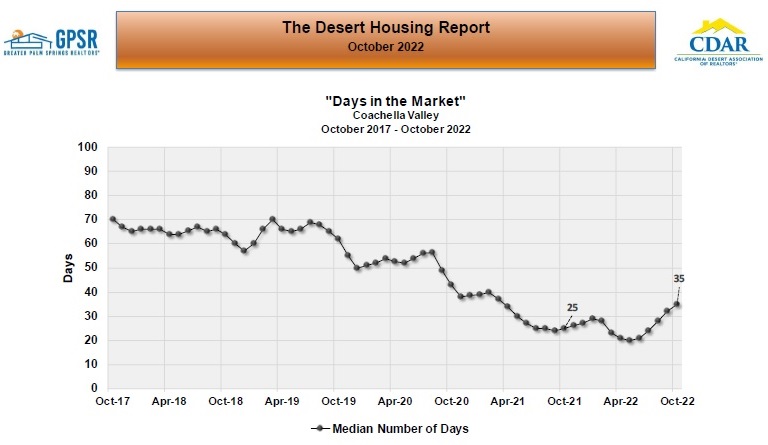 COACHELLA VALLEY REGIONAL DAYS IN THE MARKET: Average home selling times in the Coachella Valley increased in October to 35 days (compared to 25 days one year ago and 32 days in September). Market Watch felt that this metric will rapidly increase back to 50 or 60 days (the historically normal days in the market in the Coachella Valley). 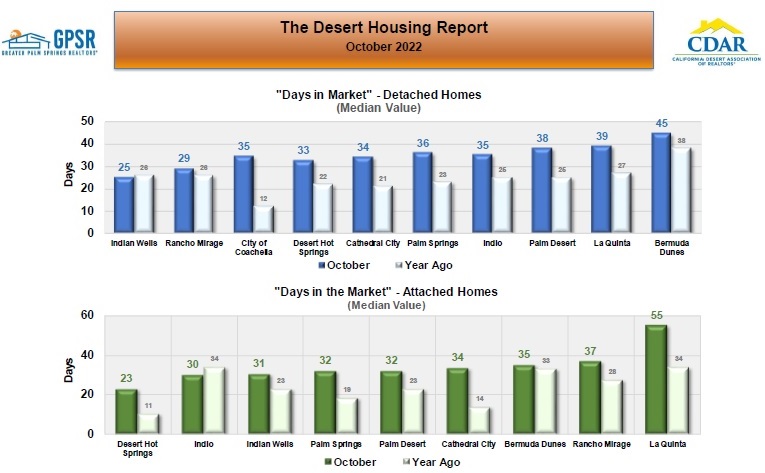 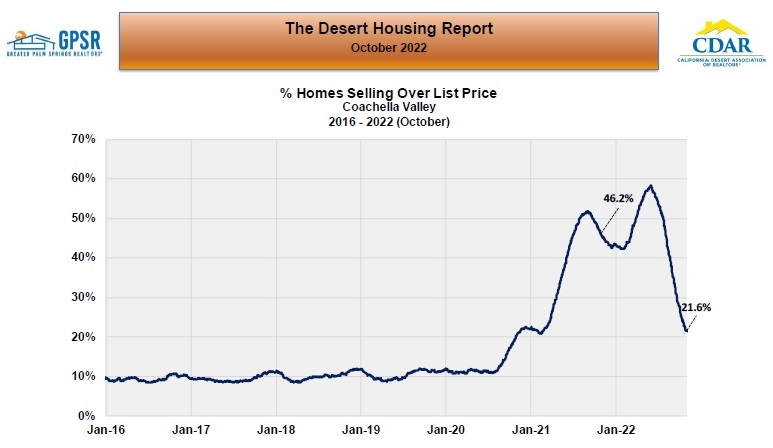 PERCENTAGE OF COACHELLA VALLEY HOMES SELLING ABOVE LIST PRICE: While the percentage of homes in the Coachella Valley selling above list price is rapidly declining, at the end of October, 21.6% of home sales occurred above list price (compared to 46.2% one year ago and 27.7% in September). Market Watch noted that the percentage of homes selling over list price continued to retreat in October to the historic norm of around 10%. 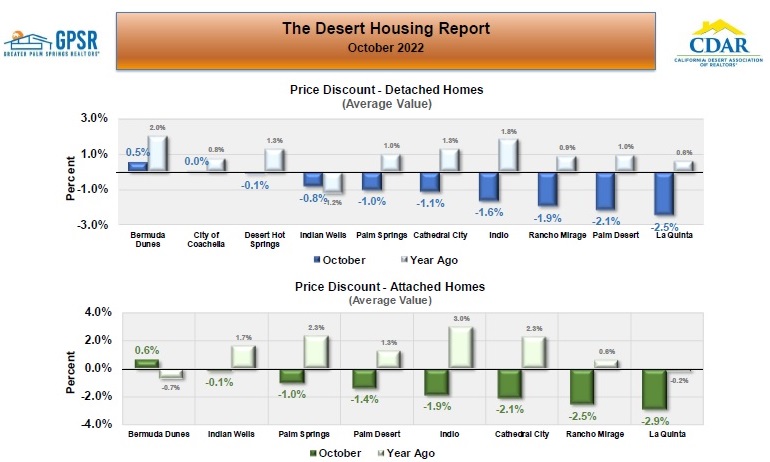