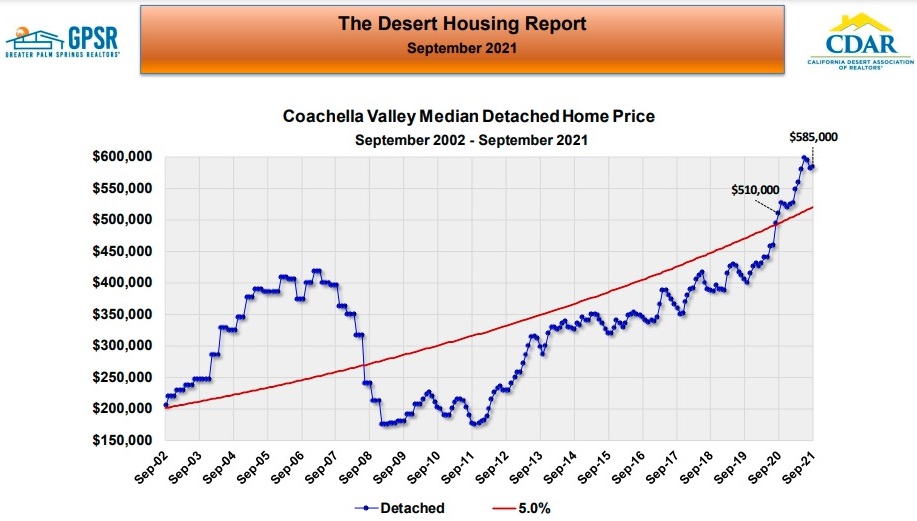 Coachella Valley Detached Home Median Price:  The Coachella Valley detached home median price in September was $585,000 (up 14.7% from the detached home median price of $510,000 in September 2020). Market Watch noted that because of the median home price increases that occurred through most of the latter part of last year, year-over-year price median home price comparisons should begin to moderate. They also stated that they believe that the major housing metrics have started the slow process of returning to more normal levels. 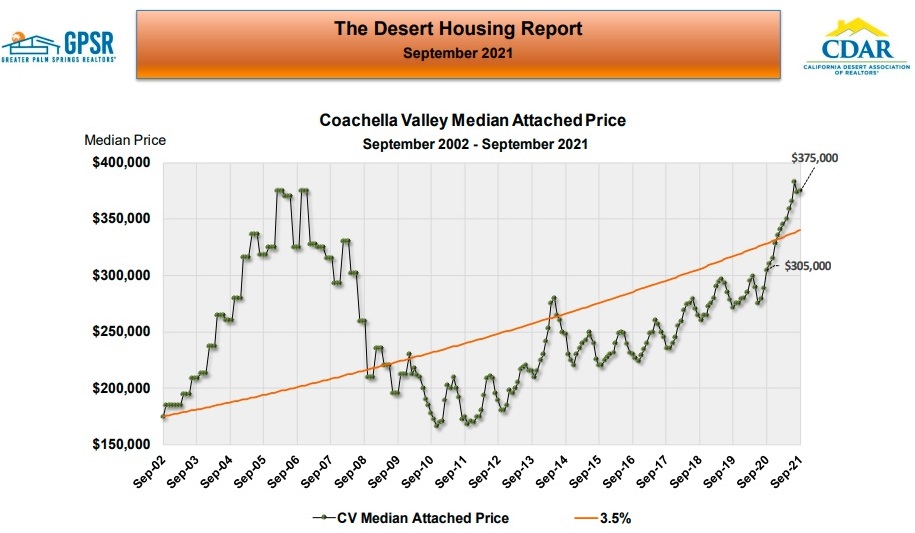 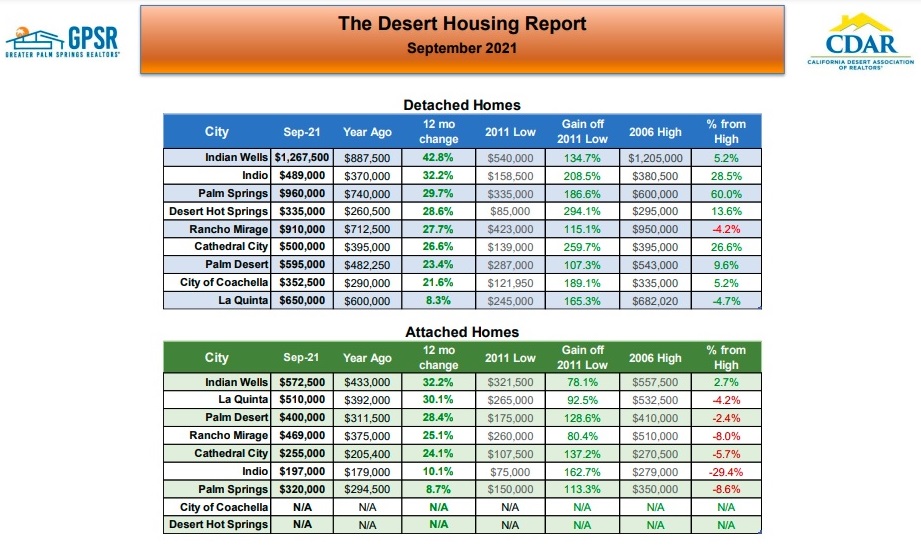 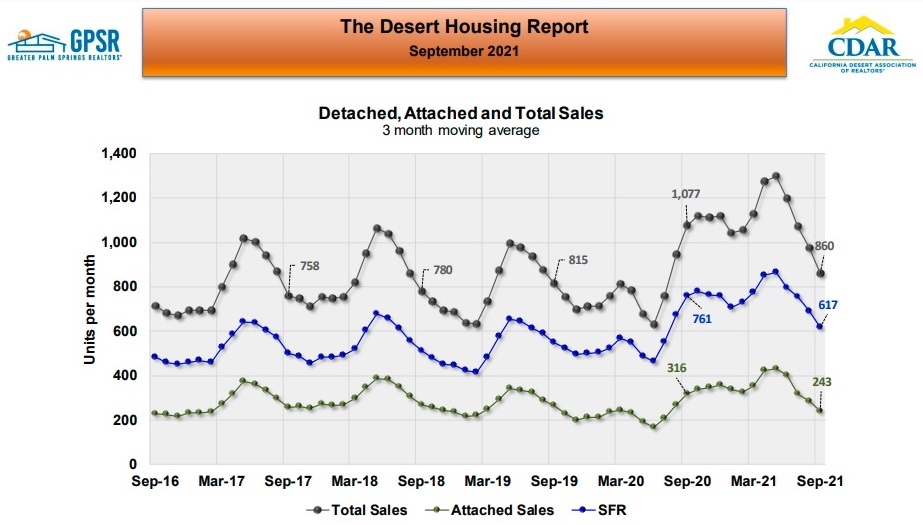 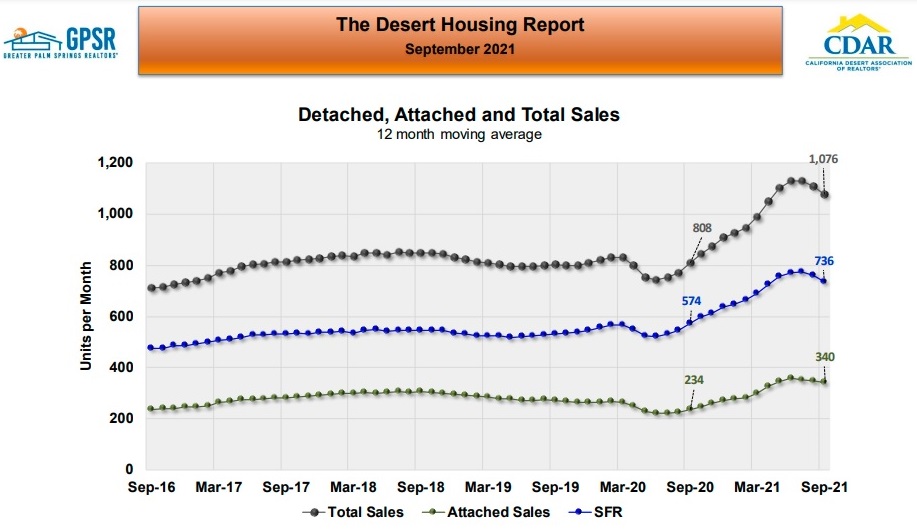 Monthly Sales - 12-Month Trailing Average: The 12-month average of home sales, which takes out all seasonality, shows total home sales in September averaging 1,076 home sales per month. Market Watch noted that this long-term sales measurement clearly showed that home sales were still above past norms but were beginning to decrease (and more so in the case of detached homes than in the case of attached homes). Market Watch stated that while they expected long term home sales averages to continue to pull back, they expected them to stay above past norms. 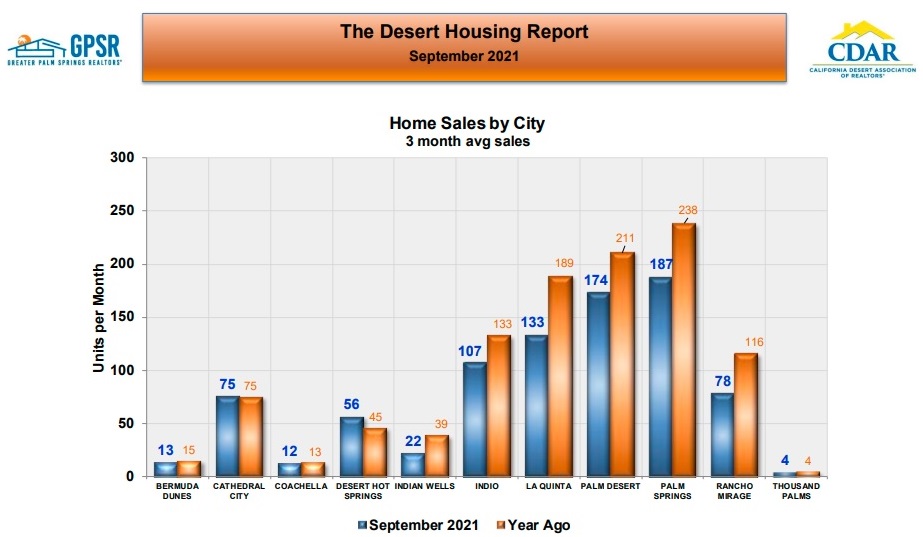 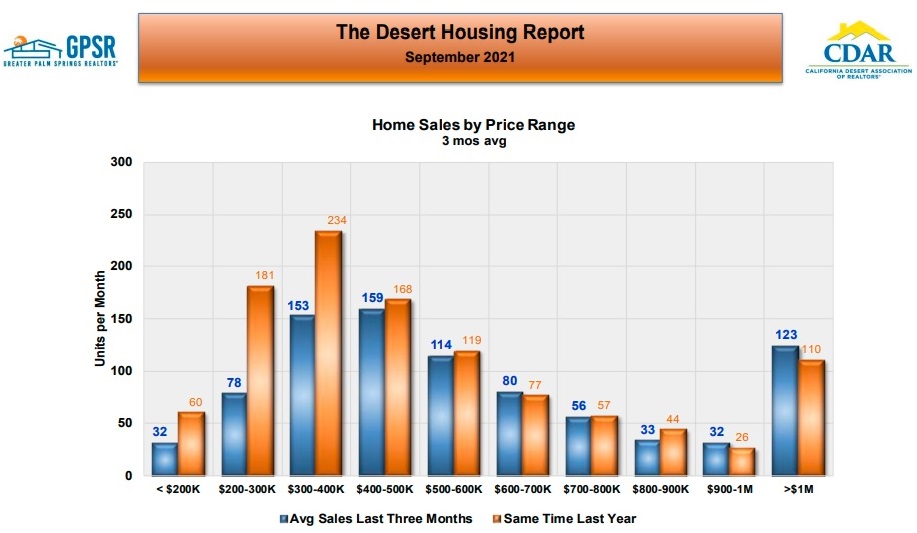 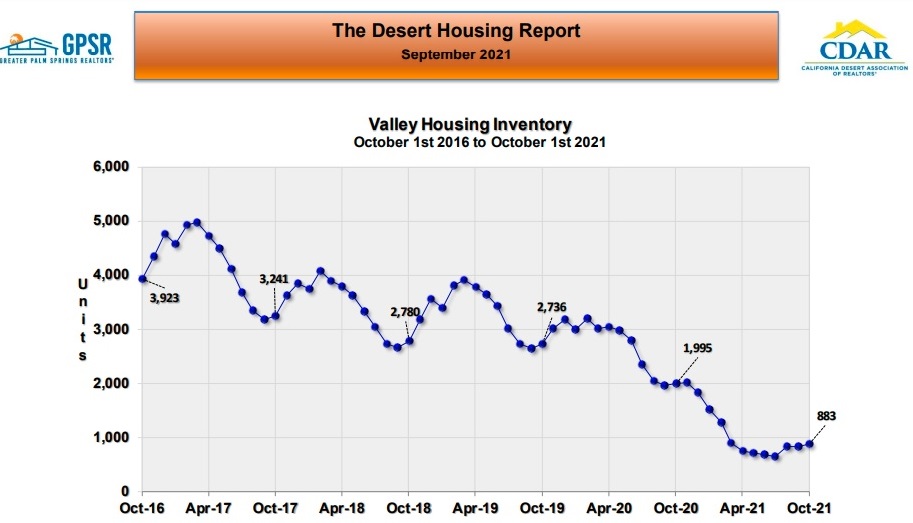 Coachella Valley Total Home Inventory: On October 1st total home inventory in the Coachella Valley was 883 homes (compared to 1,995 homes one year ago). Market Watch noted that this lack of inventory continues to be the overall force driving home prices higher. They wondered if inventory would follow the typical seasonal pattern of increasing from October to March (and if so by how much). 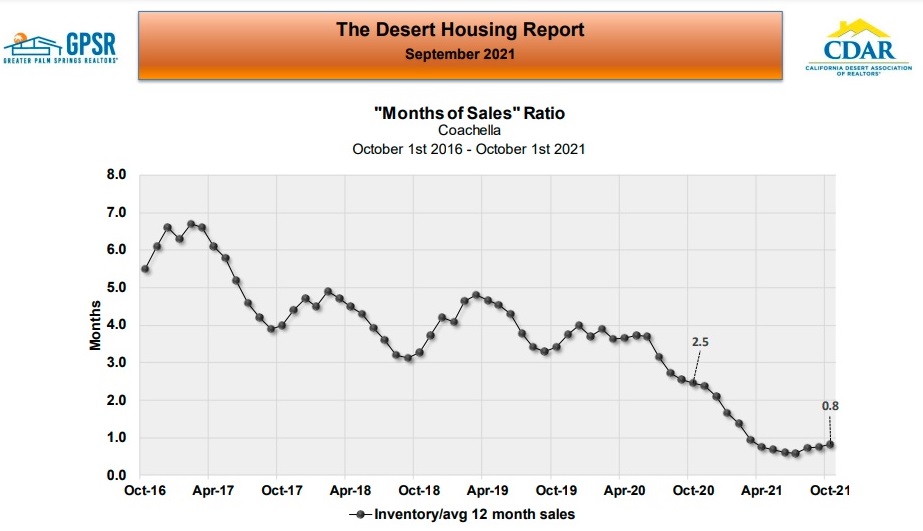 Regional Months of Sales Ratio: The median value for the months of sales ratio throughout the Coachella Valley on October 1st was 8/10ths of a month (compared to 2.5 months on October 1st, 2020). Market Watch stated that these low months of sales ratios (which measure the balance of supply and demand) are the reason that they do now foresee any significant price declines after last year’s price surge. 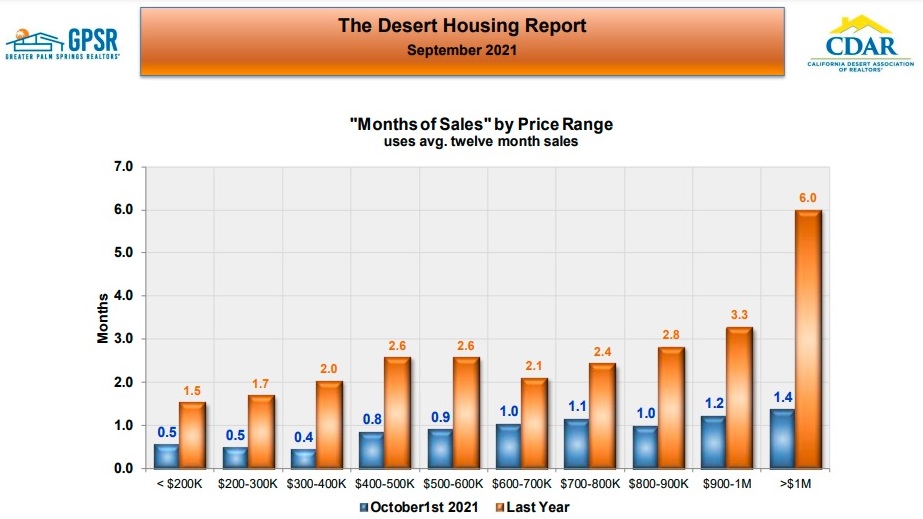 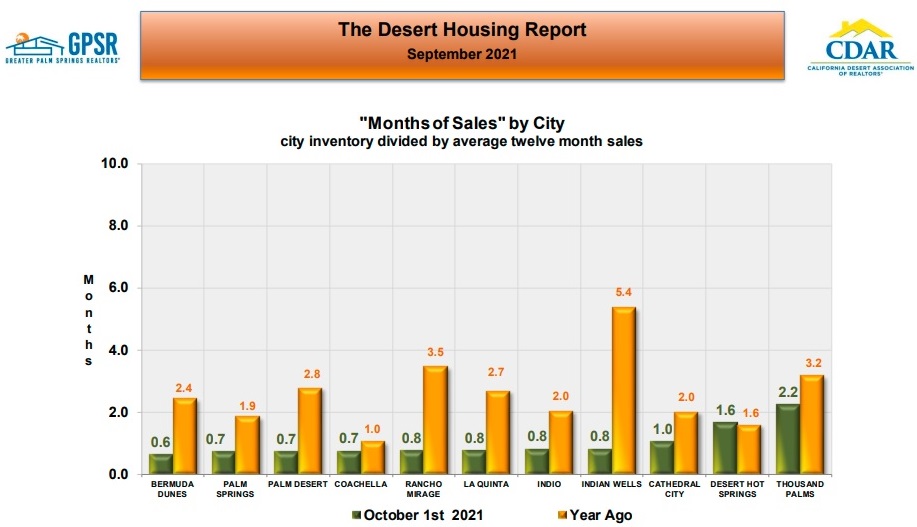 Months of Sales by City: Market Watch stated that record low months of sales ratios were found in every Coachella Valley city other than Desert Hot Springs. Market Watch expressed that they were especially impressed by the low months of sales ratios in Palm Springs (0. 7 months) and Rancho Mirage (0.8 months) because these are two very high-priced cities that would normally have much higher ratios. 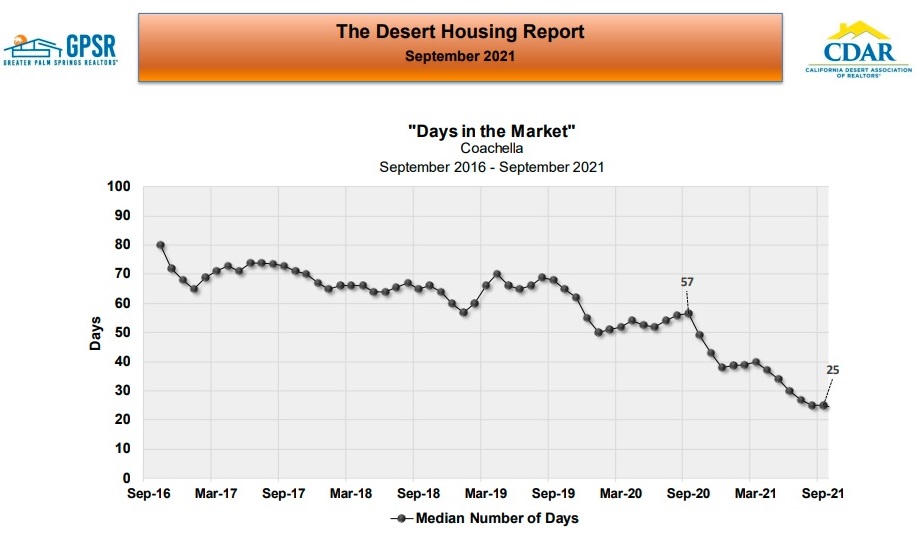 Regional Days in the Market: The median value of days in the market throughout the Coachella Valley is now at 25 days (compared to 57 days in September 2020). Market Watch explained that as demand continues to exceed supply, the average time period to sell a home continues to decline. They thought that selling times will stay near current levels while supply and demand slowly return to more normal levels in the coming months. 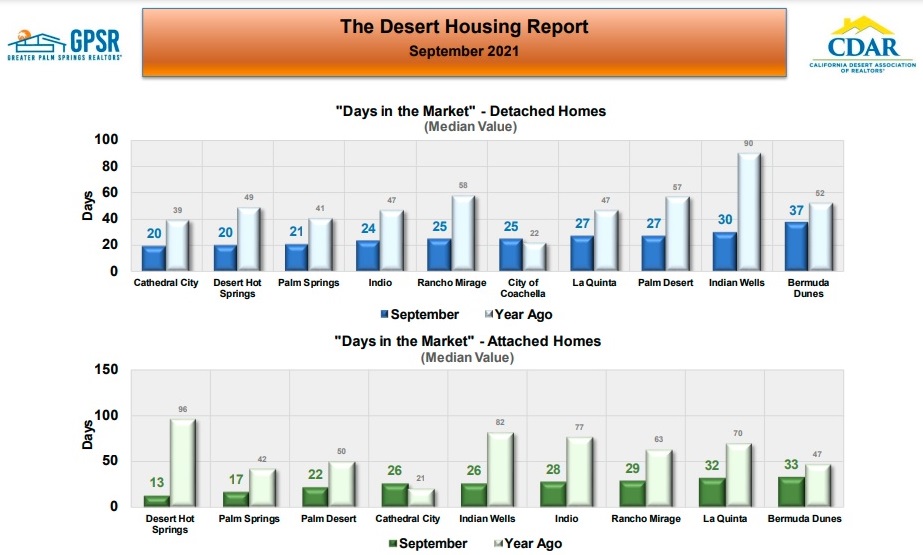 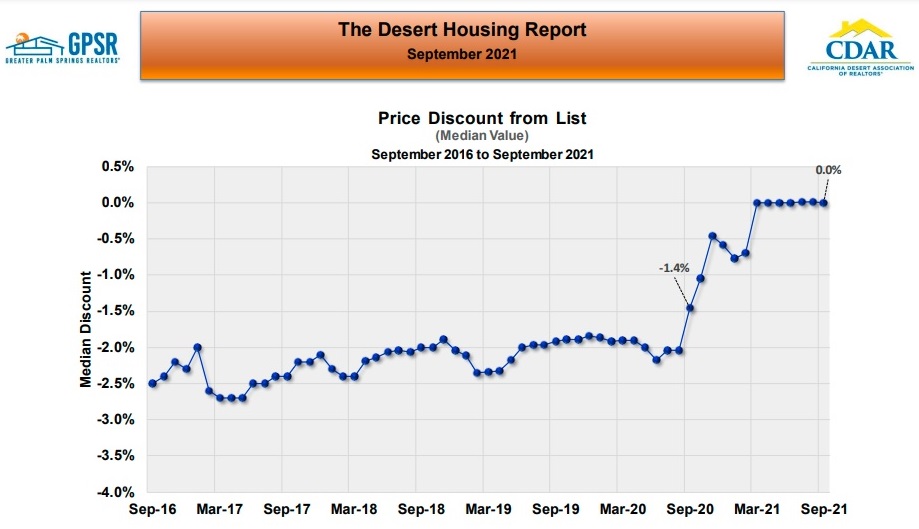 Regional Sale Price Discount from List: The median value for Sale Discount from List for detached homes in September was again 0.0% (the same as it’s been for the last seven months and compared to -1.4% in September 2020). Market Watch explained that since so many homes are selling right at list price, the median value of the discount for all sales is exactly 0.0%. Market Watch noted that the average sale price discount from list for detached homes, which averages the price discount of every sale, is 1.8% (meaning that the average home is selling 1.8% above list price). 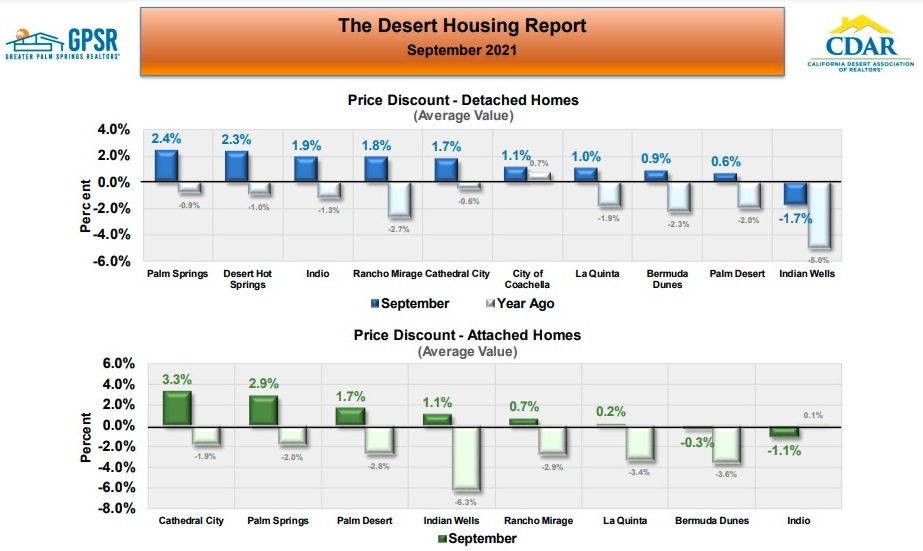